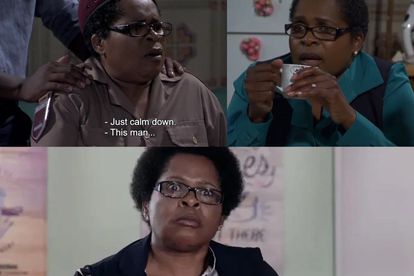 #SkeemSaam is not surprised that Mantuli is about to get fired for the third time since the inception of the show.

She doesn’t respect her employers or colleagues and is unprofessional at her work.

‘SKEEM SAAM’: MANTULI GETS FIRED FOR THE THIRD TIME

Skeem Saam’s Mantuli is about to get fired for the third time because she’s unprofessional.

She landed a job as a security guard at Turfloop University less than two months ago and has already messed things up.

Viewers are not surprised that she will lose her job and received a warning for not attending to her desk and yelling at Professor John Maputla in his office.

Mantuli (Dieketseng Mnisi) in ungrateful and treats her employers like they’re doing her a favour by employing her.

She also mistreats her colleagues and doesn’t know how to be professional at work.

HER JOB AT THE HOSPITAL

Mantuli previously worked at the Turfloop Hospital where she worked as an administrator for years.

Her employer Mr Kgomo eventually fired her when she kept absconding and mistreating her employees.

She also argued with her colleague – Celia (Shoki Mmola) in front of patients and also got into arguments with her bosses.

Mantuli is selfish because she keeps getting fired and doesn’t put her children first.

She expects her children – Kwaito (Clement Maosa) and Sthoko (Innocent Sadiki) to take care of her household while she’s unemployed.

She was home for nearly a year before she landed her current job and her children are always shocked when get dismissed because they’re in denial about their mother’s terrible behaviour.

GETTING FIRED FROM THE NUT FACTORY

She also got a job at Lehasa Maphosa’s Nut Factory shortly after getting dismissed from the hospital.

It didn’t take long for her to get fired by Lehasa (Cedric Fourie) when he realised that she’s can’t take responsibility for her actions.

She also turned the Nut Factory employees against her employer before she got dismissed.

The Seakamela children will turn against John Maputla (Africa Tsoai) when she gets fired because they’re protective over her.

“John is in the dog box with the Seakamelas again.”