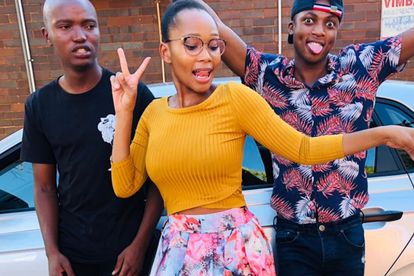 Our daily lives are so wrapped around soapies that it is easy to forget that our favourite soapie stars have lives outside the characters they portray on TV.

Therefore, it is always nice to see what the actors who portray the villains, the nice guys, and the love birds get up to offscreen.

Everyone took take part in the #JohnVuliGateChallenge including the cast of Skeem Saam who got their John Maputla (played by Afrika Tsoai) to vuli gate too.

In this video, actress Lerato Marabe, who plays the role of Pretty Seakamela, is showing the rest of the cast how to dance.

Legendary actor Meshack Mavuso, who plays the role of Dr Thabo Dlamini on e.tv’s medical drama Durban Gen, is seen leading the song in between takes at a funeral episode in this video.

Actress Sindi Dlathu (dressed in red dress), who plays the villainous role of Lindiwe Dlamini, is always game for some musical entertainment behind the scenes.

Dlathu’s fans also know that she is the voice behind the theme song of the 1Magic telenovela as well as the producer of the show.

In this video, she is joined by her on-screen children, Zenokuhle Maseko who played the character of Mbali Dikana, Lunga Mofokeng who currently plays the role of Andile Dikana, and many more.

‘UZALO’ CAST DANCING IN THE HAIR AND MAKE-UP DEPARTMENT

The cast of Gomora is full of young talent who are always posting fun videos behind the scenes on social media.