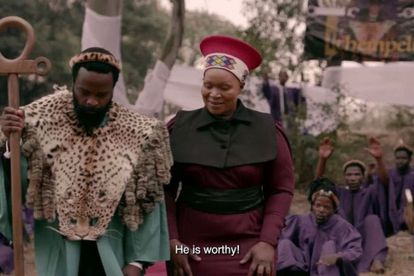 The Sunday night thriller which stars Muvhango’s Nay Maps, Generations Sthandiwe Kgoroge, and Rhythm City’s Linda Sokhulu follows two families who are at war with each other following the death of a patriarch.

Tweeps are anticipating the second episode next Sunday (10 October) and had already flooded social media before the first episode aired last Sunday (3 October).

See some of the reactions here:

However, not everyone is happy with the new drama series as Shembe Church members have expressed disappointment on social media with the show.

The church members feel that the new Mzansi Magic Sunday night thriller is mocking their church.

Thokozani Mncwabe who is a spokesperson from the church said the church is not happy with the drama as it mimics all the Shembe protocols.

“This is not allowed. We respect our religion and its leaders but this is making a mockery of it.”

“A committee has already been set up to deal with this.”

The producer of the show Mandla kaNozulu told Daily Sun that the show is not based on the Shembe Church.

“For us, the reaction has been amazing.”

“We didn’t expect the show to attract so much attention before the first episode.”

kaNozulu also assured viewers that the series is about a fictional church and that there was no need to ask for permission from the Catholic Church, Zion Church, or Shembe because it is not about them