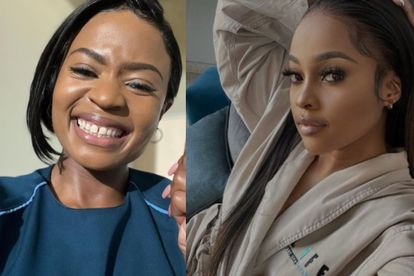 Actress Omuhle Gela, who plays the character of Nomaswazi in Uzalo has allegedly been replaced with Durban Gen actress Fanele Ntuli.

HAS OMUHLE GELA BEEN REPLACED?

This is after Gela confirmed on her Instagram account that she left the soapie after she was dissatisfied with changes to her contract.

The publication adds that the former Muvhango actress told producers that she relocated to KwaZulu-Natal because of the offer she was given, not knowing that her contract would be changed.

Sources from the show told the publication that the contract between Ntuli and the show has been finalised.

“The deal between Fanele and Uzalo has been finalised. as soon as Omuhle’s pre-recorded parts end, viewers will see the new Nomaswazi- Fanele. She was lucky to find a job after Durban Gen. After it was cancelled actors were left frustrated and unemployed. I’m happy for Fanele, we think she’s the perfect replacement.”

Fanele plays the role of Dr Zondo, who is married to Dr Dlamini in the e.tv cancelled medical drama Durban Gen.

Uzalo’s spokeswoman Nomfundi Zondi reportedly revealed to the publication that Nomaswazi will not be written out but couldn’t confirm who will play the role when contacted.

“Omuhle Gela, who portrays the role of Nomaswazi Magwaza will no longer be part of SABC 1’s hit show Uzalo due to not agreeing to contractual terms. We will update you about future developments regarding this. Stained Glass wishes to thank Omuhle once again for being a part of our family and we wish her success in her future endeavours.”

Another source from the production revealed that actors from the SABC1 soapie were living in fear.

“Nompilo is talented. She’s been with Uzalo since season one and delivered the best. When colleagues heard she was leaving, everyone was shocked. Menzi is experienced and talented. His contract not being renewed was scary for others.”