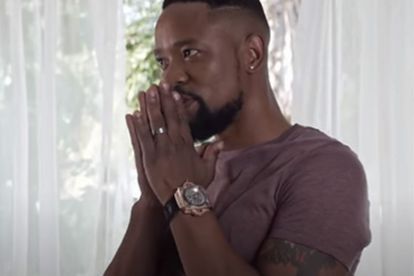 ‘The Queen’ actor, SK Khoza in his role as Shaka Khoza. Image via Twitter @officialtvsa

‘The Queen’ actor, SK Khoza in his role as Shaka Khoza. Image via Twitter @officialtvsa

The production company which is owned by The Queen actress, Connie Ferguson, said goodbye to Khoza on their Facebook account a few days ago (25 November).

The production company has wished Khoza the best for his future endeavours and also thanked the actor for his craft and dedication as he’s been with the show since season one.

Ferguson Films also expressed its confidence in the thespian that he will continue to excel in his next projects.

Sunday World reported that the actor was arrested in October after his former fiancée, Andy ‘Mandy’ Hlongwane opened an assault charge against him.

It is alleged that the former couple was arguing over his cheating scandal as he impregnated another woman.

Phil Mphela stated that writers were struggling with Khoza’s exit storyline as he was fired without warning.

SK KHOZA FIRED FROM ‘THE QUEEN’

SK Khoza, who played the role of Shaka Khoza, for six seasons got fired two weeks ago (17 November) for assaulting his former fiancée Andy ‘Mandy’ Hlongwane.

Sources from the show stated that MultiChoice decided to terminate his contract with immediate effect following his alleged assault.

His former fiancée, Andy ‘Mandy’ Hlongwane sustained severe injuries to the head because of the assault.

The 35-year-old actor was also fired by Ferguson Films in 2019 for being unprofessional and having ‘diva tendencies’ on set.

Also read:  ‘It’s a termination day’: SK Khoza has been fired from ‘The Queen’ AGAIN

REACTIONS FROM ‘THE QUEEN’ VIEWERS

“The Sho goes on…You will be missed, bro…Uncle B will miss you most…Balance me real quick”

“Please please no one is perfect, please forgive Shaka and bring him back to the show #bringbackshaka from Kenya. I love The Queen.”

“The Queen is boring now, everyone is gone. Kea, Shaka, Kagiso. They were the stars.”

“All the best to you SK Khoza continue to shine with your talent.”

Also read: ‘He never learns’: SK Khoza’s axing from The Queen is no surprise