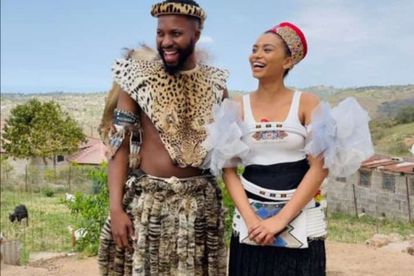 The 25-year-old actress told Sowetan that she’s still finding it hard to believe that her dreams are finally unfolding.

Hope Mbhele got her big break this year as MaBusi in Mzansi Magic’s faith-based telenovela, Umkhokha, and credits this to her patience and drive.

Mbhele tells the publication that quitting was never an option and adds that she focused on her Gagasi FM presenting job, started a sports podcast on YouTube and an online magazine when the roles were not coming.

“I never gave up when I was not getting those roles.”

“Quitting was not part of my vocab and instead.”

“I continued to work hard and prepare myself as an entertainer.”

The Durban-born actress says she’s always known that she wanted to be in the entertainment industry.

Fans of the young actress also spotted her earlier this year on Showmax’s Goodbye Gogo starring alongside Imbewu: The Seed actress, Thembi Mtshali-Jones.

“I am living my dream and I am happy where I am right now.”

“A lot of good things happened to me. I shot two movies and another one is [about to] come out.”

“This year has been good to me.”

Her character MaBusi, is a recently qualified medical doctor who is in an arranged marriage with Sphamandla (played by NeyMaps Maphalala), a church leader.

Hope Mbhele states being part of the cast has been an incredible journey as she acts alongside Mzansi’s talented actors such as Sthandiwe Msomi, Deli Malinga, Mbuso Khoza, and Sibonile Ngubane.

She adds that her character is a complicated person who has a lot on her plate as she just married a church leader and is a medical doctor at the same time.

“To be part of the show is an absolute honour.”

“I have been taken aback by how people have received the show and very supportive of me and the character.”

“MaBusi is a loving character, and she loves her family and that is why she became a doctor because she loves helping people. She is very stubborn.”

Viewers of the telenovela are thrilled that MaBusi and Sphamandla are finally falling in love despite being in an arranged marriage.

“At first she was in denial and scared because she has never fallen in love before.”

“She comes from a strict family and is finding herself as a woman.”

“No lie I was happy wen she declared her luv to Sphamandla and that moment when she said baby the sound of it.”

“Wooow guys you killed it!!! From day one I’ve been glued!!!

“My only problem is the week is too long and I waste my data re-watching the catch ups.”

“Can you please release two more episodes I promise I will still watch on Sundays.”

What do I do if my business’ social media account is hacked?

South Africans warned against ‘doing business’ with THIS online influencer