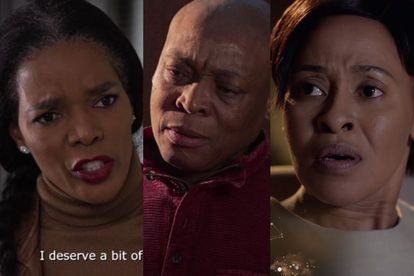 The Queen’s Hector will break his wife Harriet’s heart this month when he realises that he still has feelings for his ex-wife Vuyiswa, who recently gave birth to his only son.

Viewers of The Queen are already upset with Hector for neglecting Harriet so he can spend time with his son and ex-wife this season.

THE END OF HARRIET AND HECTOR?

The TVSA The Queen July teasers indicate that Hector and Harriet’s (Connie Ferguson) marriage will be tested when he realises that he shouldn’t have cheated on Vuyiswa while she was carrying his baby.

“Just when Hector is ready to move on, Harriet surprises him by recommitting to their relationship.”

Hector (Rapulana Seiphemo) has been neglecting Harriet ever since his ex-wife Vuyiswa gave birth to their son and he feels guilty for the way he mistreated Vuyiswa when she was pregnant.

He tried to juggle his relationship with his wife and baby mama in June and will struggle to please both women in July.

Vuyiswa (Zandile Msutwana) will sideline her ex-husband and kick him to the curb when she realises that she can’t forget about what he did to her.

Harriet will return to her dark side when she realises that she’s lost her soulmate Hector!

“After trying everything to save her marriage, Harriet finally steps into the dark side.”

Thando and Bhambatha will get back together and continue with their plans to get married… however blood will be shed at their engagement part.

PREDICTION: Brutus’ son Mlungisi, who he will kick out this month might be behind this as he and his father are not on speaking terms.

Brutus will ask Harriet for another chance to work at Khoza Logistics when he learns that she’s no longer interested in her husband, Hector.

Goodness will learn that her manager Blessing was involved in the break-in at her restaurant at Nomas.

TVSA has revealed that the telenovela’s seventh and final season will premiere on Monday 25 July, for 125 episodes.

This is after Mzansi Magic revealed that the series finale will air on 13 January 2023 earlier this year.