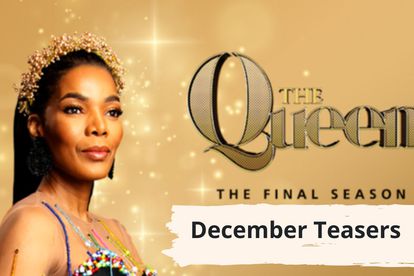 Coming up on The Queen this December 2022:

What happened to happily ever after?

Harriet makes moves to get the Khoza family back on top. Mpumelelo confronts Mncedisi with some damaging info from his past.

Harriet gets one over Londiwe and the Khozas are back on top. Mlungisi and Brutus butt heads. Mjekejeke and Patronella have to save Mncedisi.

Londiwe finds the snitch in her camp. Is a father and son feud going to end Mlungisi’s marriage? An unexpected announcement shocks the Zulu household.

Mlungisi wants to make up for past mistakes but is he too late? Mpumelelo is struggling to deal with Mjekejeke and Patronella’s decision to leave. The Jama family realise they’re in big trouble without Julio.

Patronella and Mjekejeke prepare to leave Gauteng. Mlungisi makes a big decision about his future with Cora. Londiwe plots to bring down Harriet.

Listening on the enemy

Londiwe finds a way to infiltrate her enemies and get the upper hand. Brutus refuses to accept Mlungisi’s marriage.

Cora’s good intentions seem to blow up in her face. Mncedisi and Mpumelelo find that they’ve bitten off more than they can chew. Londiwe sets in motion a deadly plan to retaliate against the Khozas.

Bee in your bonnet

Mncedisi runs out of ideas when it comes to pleasing Mbali. Londiwe puts a bee in Mlungisi’s bonnet.

Mlungisi deals with the loss of Cora. Mncedisi and Mpumelelo work to appease the demanding Mbali.

A question of vengeance

Londiwe tries to encourage Mlungisi to take revenge on Brutus for Cora’s death. Mncedisi goes all out to ensure Mbali has a good time at her party but things don’t go as planned. The Khozas hold a memorial for Cora.

Brutus and Mlungisi bury the hatchet. Londiwe resorts to other plans when she fails to use Mlungisi against his own family. Mpumelelo makes a discovery about a new drug in Tembisa.

Your enemies are my enemies

Londiwe has the Khoza brothers where she wants them. A corpse from afar lands in Waterfall.

A son for a son

Harriet learns that her loved ones have fallen into an enemy’s hands. Brutus retaliates against an enemy, deciding that it’s going to be an eye for an eye. Mpumelelo inches closer and closer to bringing down an enemy of the police.

A deal with the evil herself

Harriet will do anything to reunite the family. Brutus is filled with regret over his mistakes as a father.

Londiwe puts her plan to take over into action. Olerato is unsettled by Bhambatha’s sudden return.

The games we play

A delicate chess game is underway and the Khozas aren’t even aware. Mpumelelo zeroes in on the truth behind who controls the drug trade.

A party to remember

The Khozas get ready to host a party for the Big 5 but they have no idea about Londiwe’s plan to sabotage it. Mlungisi starts doubting Londiwe.

How will the Khozas deal with the aftermath of the party of death? Londiwe strikes again.

Londiwe lays out her master plan. Mpumelelo wants to go after the Khozas for the Big 5 massacre.

It’s not raining but pouring for Brutus. Mpumelelo is starting to feel like he’s failing as a cop.

Premiere episodes of The Queen air on Mzansi Magic from Mondays to Fridays at 21h00.