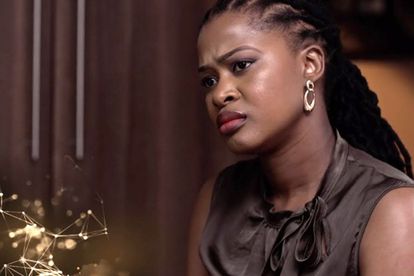 Actress, Zenande Mfenyane, who plays the role of Goodness Mabuza on Mzansi Magic’s telenovela, The Queen, is set to return next month (December).

The TVSA December teasers confirm that the actress will debut on Monday, 13 December without her husband, Kagiso Khoza.

The teaser for Monday, 13 December reads:

“… Goodness manages to keep her secret about Kagiso from their family”.

Mfenyane exited the show in May this year with her on-screen husband, Kagiso Khoza, played by seasoned actor, Loyiso McDonald.

The channel announced in May that Loyiso MacDonald was leaving the show six seasons later to join the theatre.

“MacDonald has entertained our viewers over the past five seasons and over the years many of them have fallen in love with his character.”

“As Mzansi Magic, we would like to thank him for his contribution and wish him well in his future plans. It is always sad when a talent leaves a show.”

Fans of MacDonald should not expect to see Kagiso on The Queen anytime soon as he’s busy with other projects.

There seems to be trouble in paradise for the married couple as the teasers suggest that Goodness is going to badmouth him to his family.

Actor, Lebo Msiza, who just joined the telenovela last week to play the role of Clive is going to take his relationship with Akhona to the next level in December.