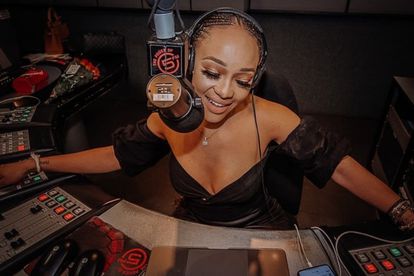 How to Ruin Christmas: The Wedding star Thando Thabethe is set to join the radio station for the afternoon drive show on weekdays from 15:00 to 19:00.

The afternoon show is called 947 Drive with Thando and will be co-hosted by Alex Caige. Thando Thabete excitedly took to social media to share the news with her 2.9-million followers.

Thando Thabethe posted a promo video welcoming listeners into the studio with the caption:

“Thabethe has over a decade of experience in the entertainment industry, and has proven to be a successful and gifted presenter during her time on various radio stations,” 947 station manager Thando Makhunga said in a statement.

“She is a young, dynamic and multi-talented woman whose drive and ambition is a great example for all aspirational South Africans with the courage to reach – and work – for their dreams,” Makhunga added.

Thando Thabethe’s show will replace Fresh, the show previously hosted by DJ Fresh, before he became embroiled in rape allegations.

A month later, both DJs were cleared of the charges. However, they were dismissed by their employer, Primedia Broadcasting.

THANDO THABETHE ON HER PASSION FOR RADIO

The Love Lives Here actress said she loved radio and connecting with people through the medium. Thando Thabethe has been making waves in the entertainment industry since her student years, when she presented on University of Johannesburg (UJ) FM.

“I am really excited to be returning to radio and to have been approached by Joburg’s coolest frequency, 947, is just fantastic. I have always loved radio as a medium to genuinely connect with people through music and conversation,” Thabethe said.

“I believe that music is a true leveller, bringing people together in a place and time that is just about what they are hearing and how it makes them feel. I can’t wait to get behind the mic and contribute to our 947 audience’s listening experience.”

Besides bringing in Thando Thabethe, the station said it was bidding farewell to Mantsoe Pout as part of its changes to the drive show.