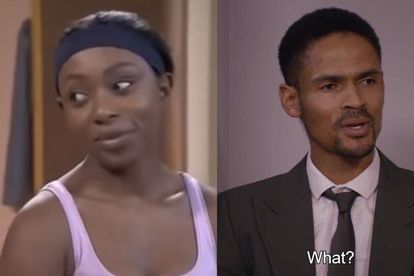 ‘Skeem Saam’ actors, Eric Macheru as Leeto Maputla and Joy in their roles. Images via Twitter @SkeemSaam3 and YouTube @SkeemSaam

‘Skeem Saam’ actors, Eric Macheru as Leeto Maputla and Joy in their roles. Images via Twitter @SkeemSaam3 and YouTube @SkeemSaam

Leeto (Eric Macheru) won’t spend the festive season with his family this year as he’s going to be too heartbroken by his mother’s sentencing to prison.

He is close to Meikie (Harriet Manamela) and hasn’t been a fan of John since he cheated on his mother.

He and John (Africa Tsoai) also drifted apart when he found out that he’s not his biological father.

The TVSA December teasers reveal that Leeto will be smitten by Joy when he meets her for the first time on Tuesday, 28 December.

There hasn’t been much information about Joy at this stage as she’s only been introduced to viewers as Nothile’s (Mbali Mavimbela) childhood friend.

The pair will have sexual intercourse the day after they meet on Wednesday,  29 December.

“Joy freaks out when she wakes up in someone’s arms.”

They will spend a lot of time together towards the end of the year until the beginning of 2022.

Joy hasn’t impressed #SkeemSaam on Twitter because she’s not loyal to Nothile, and has often revealed her deepest secrets to her boyfriend, Lehasa

Why ‘Gomora’ viewers think Jackie was a terrible principal

Threats of national shutdown for SA over fuel increases and blackouts