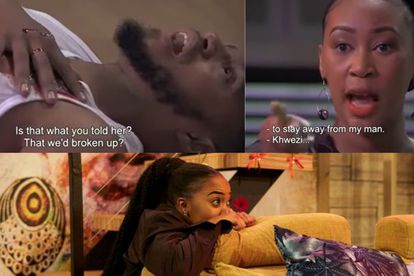 Viewers of the educational soapie Skeem Saam are worried their fan-favourite couple #PreHasa might not recover from last night’s shocking episode where Khwezi stabbed Lehasa and framed Pretty when the police showed at his apartment.

It ended in tears for Skeem Saam’s Lehasa and Pretty yesterday (27 June) after Khwezi (Samukele Mkhize) found them all over each other in his apartment.

Viewers were on the edge of their seats and couldn’t believe that Khwezi not only stabbed Lehasa once but twice and ran after Pretty who managed to leave the apartment unharmed thanks to the Detective Peterson.

Khwezi who appeared to be in a trance then framed fan-favourite character Pretty when the police arrived and accused her of being a jealous lover who wanted Lehasa to herself.

Khwezi’s fingerprints are all over the knife she used to stab Lehasa (Cedric Fourie) who isn’t dead.

Team #PreHasa knows he will protect Pretty (Lerato Marabe) and vouch for her when he recovers and she will be released from jail.

Fans have also noticed that Lehasa seems to attract the craziest women who either fall pregnant with his baby and lose it, are obsessed with having his baby, or can’t have his baby.

His late wife couldn’t carry his baby because she had cancer and Nothile lied about not being able to conceive because she didn’t trust him.

“Why is Lehasa always attracting dangerous women and this time Kwezi is ready to kill.”

“Can we kindly pray for Lehasa speedy recovery….for Khwezis arrest and have the best wedding of the year PREHASA ”

“No. Lelo once put kwaito in a bag, then asked Kat, Kwaito’s best friend, to help her carry the bag to the taxi rank, burned the house with Kwaito inside, then stole the book and made millions off of it.”

“Nah Lelo would have packed both of them in suitcases and traveled with them home for looks negotiations.”