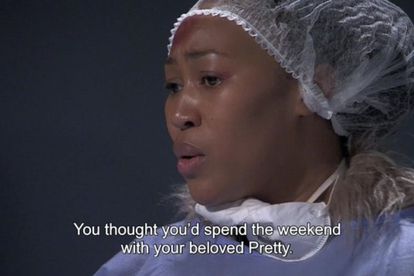 ‘Skeem Saam’: Khwezi gets cuffed for the attempted murder of Lehasa. Image via Twitter @SkeemSaam3

‘Skeem Saam’: Khwezi gets cuffed for the attempted murder of Lehasa. Image via Twitter @SkeemSaam3

The TVSA July Skeem Saam teasers indicate that Peterson (Mortimer Williams) will handcuff Khwezi for the attempted murder of Lehasa and Pretty.

Viewers of the soapie are thrilled that their favourite villainous character isn’t dead after Khwezi attempted to kill him again on Friday (1 July) at the hospital and framed Pretty for it.

“Khwezikazi is knocked for six when she learns that her genius plan didn’t work.”

Viewers of the educational soapie should know that Khwezi (Samukele Mkhize) will not give up trying to kill Pretty and Lehasa. She will attempt to finish her off next Monday, 11 July when she sees another opportunity.

The teasers also suggest that the show’s most hated character Khwezi will be cuffed on Wednesday 13 July.

“Petersen puts a final nail to Khwezikazi’s coffin in a form of cuffs.”

“Pretty must find a way to alarm everyone that Khwezi should never be allowed to see Lehasa or else ho tlo shwa rona.”

“These want to give us heart attack Lehasa cannot die I knew it Mantuli ene and drama.”

“We all hate Lehasa but at this point, we want him alive.”

“If I was Sergeant Peterson I was gonna watch yesterday’s #SkeemSaam to see who exactly stabbed Lehasa.”

“I still don’t understand why Kwaito and MaNtuli failed to tell Khwezi that they have proof that Pretty had an abortion.”

“The writers have been very lazy lately, even this storyline of Magongwa being blind and trying to blame the Principal doesn’t make sense when we know that the culprits are those school kids ”

“Peterson said “we’re done with the crime scene, you can go back home”… Nothing about the gun and the safe in that apartment being out of place. I think I’ll stop watching @SkeemSaam3 for a while, aowa bahn.”