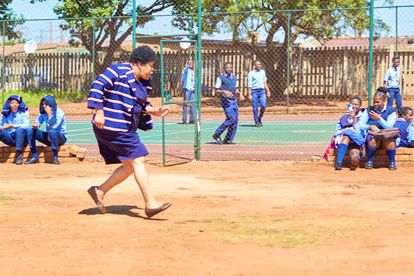 Viewers of the educational soapie Skeem Saam are protective of Principal Thobakgale (Elizabeth Serunye) and Meneer Magongwa who are being ill-treated by Paxton Kgomo.

Paxton (Thabiso Molokomme) is also to blame for causing Magongwa’s temporary blindness which landed him in hospital.

Thobakgale is in trouble with the community as she’s also blamed for Magongwa’s (Putla Sehlapelo) state after she sent him to the class which was meant for her.

Magongwa’s wife Celia (Shoki Mmola) also attacked Thobakgale in her office when she found out that her husband may never see him again.

Viewers of the soapie now want Paxton who’s dubbed the leader of the grade 8s to get punished for mixing chemicals that caused his temporary blinds.

Fans also want Mahlatse who is Magongwa’s stepson and a learner at the school to confess to the police and the principal about what Paxton did so he can be punished severely.

“Paxton’s will make the principal take an early retirement.”

“I hate Pax, ngwana Mr Kgomo and Skeem Saam do you know the kids will copy here next time they will teach this.”

“Mahlatse must come clean, he can’t be afraid of Pax like that this storyline is annoying now, it should come to an end.”

“But why are these kids afraid of Paxton? Even Mahlatse chose to be scared than tell the truth about what happened to his father.”

“I’m glad his very own was involved in this. He’s too forward and has been defending the rascals.”

“What will he say the day he finds out who released the bucket?”

The Flying Spur Blackline builds on Mulliner’s new dark side

Polestar 6: The electric roadster concept will be put into production

Will the Proteas spring selection surprises against England?

Royal AM vs Orlando Pirates: How to watch the match on TV