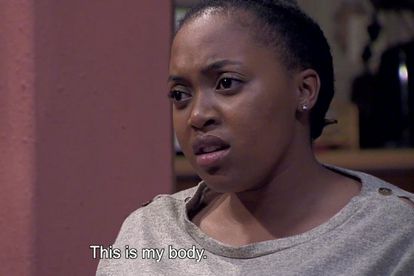 Pretty will tell her family tonight that she doesn’t want to keep the baby after the disastrous meeting the Seakamelas had with Lehasa (Cedric Fourie) on Friday (24 September).

Pretty (Lerato Marabe) failed to terminate her baby two weeks ago when the clinic experienced load shedding and closed down.

The teaser for tonight’s (28 September) episode reveals that Pretty will put her foot down, and remind her family that she has every right to terminate because she’s over 21-years-old.

Her mother (Dieketseng Mnisi) previously informed her that she will disown her if she terminates her baby.

Her mother also reminded her that she was in a similar situation a few years ago when she was pregnant with Kwaito (Clement Maosa).

Mantuli also reminded her that Pretty’s older sister (Sthoko played by Inno Sadiki) fell pregnant with Clement (Vusi Leremi) before she was 21-years-old.

The TVSA teasers from 28 to 30 September suggest that Pretty’s mother will not support her when she decides to terminate.

The teasers also reveal that Pretty will fail to terminate her baby once more after the Maphosas contact her.

She will change her mind about terminating her pregnancy when the Maphosas contact her on Thursday (30 September).

WHY PHUMULO CARES ABOUT THE BABY

We know that Lehasa doesn’t want anything to do with Pretty and the baby because he’s moved on with Nothile (Mbali Mavimbela).

The only person who cares about Lehasa’s baby at this stage is Lehasa’s uncle (Phumulo played by Sam Shale).

Phumulo will most likely contact Pretty this Friday and will be the reason Pretty keeps the baby.

He tried to make peace between the families when they visited Lehasa on Friday (24 September).

He knows that Lehasa will regret what he’s doing to Pretty when the baby is born.