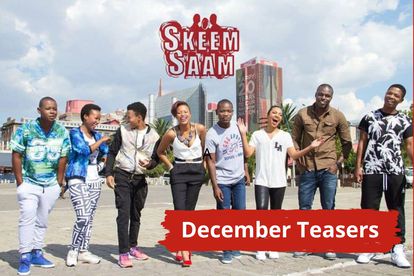 Skeem Saam Soapie Teasers provided by TVSA. This article was first published by them.

Coming up on Skeem Saam this December 2022:

The real Ntate Kganyago is unleashed and he has many faces. In trying to strike a deal with Dragon, Leeto gets a slap in the face. Koloi dodges a bullet with his father.

Elizabeth is knocked for a six when Jacobeth’s life as she knows it, changes forever. The community of Turf is up in arms with the Maputlas’ new business venture. It’s all systems go for Koloi ahead of the Miss Capricorn event.

Jacobeth kicks Elizabeth to the curb. Leeto vows to making his club opening a success. The teenagers sing Nakedi Maphuthuma’s praises while Koloi suffers the side effects of an unexpected outcome.

A mother, stuck between a rock and a hard place, is forced to choose love over blood. The battle lines are drawn between a son and his parents.  Lehasa is upset when he learns that he was inadvertently rendered an absent father during a crisis.

Ntate Kganyago peels off his mask and what’s beneath it is not pretty. Lehasa bites off a former Rovuwa chef’s ear for almost getting him arrested. Charles is offended by Nora’s unexpected confession.

Elizabeth learns some disturbing intel on her mother’s beau’s not so distant past life. Eunice pleads with Leeto to give her a waitressing job at his new joint. Chef Kgosi rubs Lehasa up the wrong way when he shows up unannounced at Khwezi’s place.

Ntate Kganyago is at the cusp of getting what he wants. Leeto’s plans for Bazaruto are coming together nicely. Pretty calls Lehasa to order with the Khwezikazi situation.

Ntate Kganyago orders his accomplice to “take care” of a certain doctor. Eunice stands her ground and Solomon cannot believe it. Khwezikazi seeks help from an unexpected ally.

Leeto finally stands up to his nemesis after suffering a sabotage. Elizabeth’s digging lands her in danger. Lehasa is alarmed when he learns of Khwezikazi’s recent visit to the doctor.

Leeto’s launch is a success of epic proportions. Jacobeth’s engagement party turns out to be a bay of panic for her. Ntswaki is desperate to attend Leeto’s club launch.

Jacobeth’s ordeal is a joke to her enemies while her daughter remains ‘MIA’. Khwezi’s idea of developing the baby throws Lehasa off and amuses him. Joy and Leeto’s relationship starts sinking.

The chickens come home to roost for a certain swindler as the cops’ trail on him heats up. Eunice is not impressed with the latest addition to the Bazaruto staff roster. Phomolo tries to convince Lehasa that Khwezi’s idea to strengthen their pregnancy isn’t such a bad one.

Jacobeth sincerely apologises to Elizabeth, while doing all in her power to restore justice. Ntswaki digests her new world, playing some of her old tricks on the Maputlas. Chef Kgosi tries to wriggle his way into a new accommodation.

The two most wanted fugitives resurface at another hospital. The Seakamelas receive a pleasant Christmas surprise. Leeto puts Dragon in his place.

Kganyago disappears into thin air and brings a devastated Jacobeth to her knees. Leeto confronts his Head of Security for illtreating his patrons. A young lady has the hots for Chef Kat.

Luc calls Elizabeth to officially strike the last nail into Jacobeth’s coffin. Ntswaki pulls a disappearing act and freaks out Meikie. Khwezikazi is not too welcoming when Lehasa presents her with a new Midwife.

Chef Kgosi makes a desperate move and it backfires. Meikie shoves John into a corner regarding their marriage. Jacobeth receives an aggravating message from Kganyago.

Leeto has undeniable electricity with one of his employees. Jacobeth prays for a better 2023. Meikie and John’s relationship takes a turn.

Skeem Saam airs on SABC1 Mondays to Fridays at 18h30.