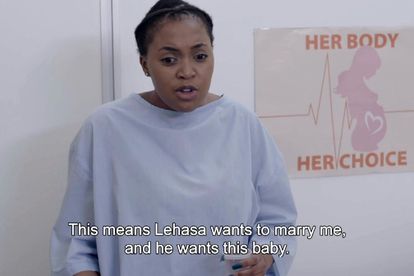 Viewers of Skeem Saam are devastated with Pretty (Lerato Mrabe) for wanting to terminate her pregnancy.

Pretty appeared to have terminated her pregnancy on Friday’s episode after being pregnant with Lehasa Maphosa’s baby for 13 weeks.

The show hinted that the Maphosas will contact Pretty on Thursday night just before she had the abortion, but it turned out that Mantuli (Dieketseng Mnisi) was dreaming.

Tonight’s teaser also suggests that Nothile is going to flip Lehasa’s world upside down when she reveals that she either doesn’t want children or she can’t have children.

Lehasa (Cedric Fourie) will regret turning away the Seakamelas if Nothile can’t have children or doesn’t want children.

This will be history repeating itself for Lehasa as he also wanted children with his wife before and she couldn’t have kids.

He is in love with Nothile now, but their relationship won’t last because he will be haunted by Pretty’s baby down the line.

IS THERE A FUTURE FOR #PREHASA?

Viewers are still hoping that Pretty changed her mind about the baby and that she is still pregnant.

They want her and Lehasa to get back together when he finds out that Nothile (Mbali Novimbela) doesn’t want kids or can’t have kids.

Pretty and Lehasa is #SkeemSaam on Twitter’s #CouplesGoals and viewers will never accept that Nothile has replaced Pretty even though they’re a good match.

Nothile has also given viewers bad vibes since she joined the show as fans are comparing her to Lelo Mthiyane (Amanda du Pont) who was a villain on the show.