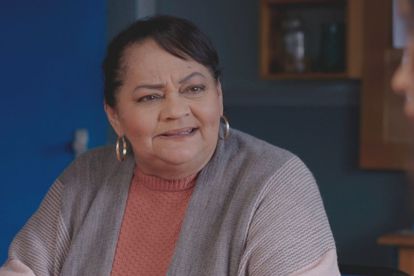 The scenes that the legendary actress Shaleen Surtie-Richards recorded days before her unexpected death will be shown on television this week in kykNET & kie’s (DStv channel 145) popular telenovela Arendsvlei.

The country was in shock when Shaleen passed on in June this year. She was in Cape Town to shoot episodes for Arendsvlei.

Shaleen already made her first appearance in the telenovela in 2019 as Muriel Foster and returns for the last time on Thursday.

“Muriel entered our world as Lionel Foster’s (Jody Abrahams) overprotective mother who visited home for a short while. Muriel is a retired nurse who works at Nurses without Borders and only comes home now and then,” says Tarryn Josephs, publicity manager of Arendsvlei.

This time around, Muriel comes home to help with the arrangements for her grandson, Lee-Roy’s (Roberto Kyle) wedding. Lee-Roy and Wesley Rossouw (Craig Adriaanse) got engaged earlier this year. They announced this week that they will be getting married in four weeks.

The family barely processed the announcement when Muriel unexpectedly shows up. And as we know Muriel, of course, she wants to take over the arrangements. The couple then decides to host a competition and the winning team will arrange the wedding.

Muriel and Lionel, who also refers to each other as “Mammatjie” and “Baltjies”, are in a team while Ronel (Melanie du Bois), Lee-Roy’s mother, is in a team alone.

“Shaleen will be on Arendsvlei for a month. She shot with us for almost two weeks and was her happy self on set and made jokes as usual. It’s a privilege for us to showcase her last scenes,” says Tarryn.

Shaleen’s storyline was completed the Friday before her death.

Arendsvlei airs every Monday to Thursday at 19:30 on kykNET & kie (DStv channel 145) and has English subtitles.