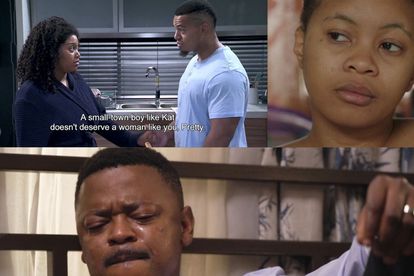 It is time to dish on which storylines in soapville made us shake our heads since the year is ending.

From ‘The River’s Dimpho living a fake life on social media and ‘twanging’, to ‘Skeem Saam’s Pretty’s hanging ‘abortion’ storyline to ‘Gomora’s’ Melusi sleeping in his office.

Dimpho Mokoena was simply not the right character to portray the ‘fake life’ on social media though viewers of the multi-award-winning telenovela agree that her storyline was both informative and educational.

The storyline would’ve suited Beauty (Galaletsang Koffman) who is less authentic and is obsessed with social media.

Dimpho’s (Matshepo Sekgopi) storyline felt forced as she completely transformed overnight, and even changed her accent.

It also felt like a ‘delayed storyline’ that was supposed to air in season three and played by Tumi Mokoena-Dikana (Larona Moagi) when she moved to her mother’s mansion.

Viewers of Skeem Saam were so invested in Pretty Seakamela’s (Lerato Marabe) ‘pregnancy’ storyline that they are still confused as to whether she went through with the abortion or not.

The educational soapie left viewers hanging after she went to the hospital to “have an abortion”.

Viewers are still making their conclusions as to whether she went through with it or not.

The Seakamelas have not brought up Baby Maphosa since the hospital, Pretty never went to counselling, and has no side effects, etc.

It’s as if she was never pregnant to begin with and we dreamt the whole episode!

WHAT DOES MELUSI DO WITH HIS SALARY?

Melusi’s (Zolisa Xaluva) ‘sleeping in the office’ storyline is the most bizarre out of the three storylines on this list.

He is sleeping in his office since he got dumped by his lover, Thati (Katlego Danke), and his wife, Gladys.

Did the writers forget that Melusi is the principal of Gomora High School and can afford an apartment?

He’s been sleeping in his office for a week now and his wife, Gladys (Thembi Seete) keeps rejecting him.

It appears he’s actually asking for love back so that he can have a roof over his head and get a decent meal because let’s face it, he might as well be unemployed.