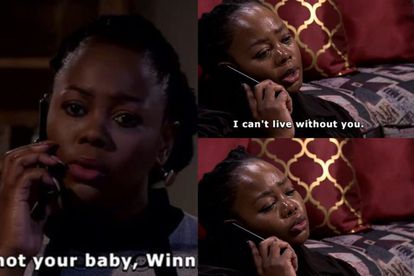 NOLWAZI NGUBENI: ‘IT HAS BEEN VERY EXCITING FOR ME’

Ngubeni reveals in an interview with Sunday World that her character tackles the pressures that women go through in the real world in terms of having children.

“Usually, I always get the sweeter roles, but I love playing the villain and being that person that perpetuates the drama throughout the soapie. It has been very exciting for me, especially coming back into the industry and playing roles that are completely different from what I am known for.”

Her much-talked-about character Mbali is a desperate woman who will do whatever it takes to make her husband happy, even if it means faking a pregnancy.

“There are a lot of things that women do behind the scenes to keep everything intact. Mbali is not different from the rest of us in terms of what people do to get ahead in life.”

ALSO READ:‘Scandal!’: Cat’s out of the bag… Mbali Khubeka is living a double life

HER ROLE BEFORE ‘SCANDAL!’

She adds that women can learn a lot from her character, especially because they tend to put their partner’s and family’s happiness first.

“I never imagined myself playing this type of a villain, but I can tell you one thing, I am having the time of my life and find myself laughing at the things Mbali does.”

Ngubeni and her current character Mbali are very different as her life is private and prefers it that way.