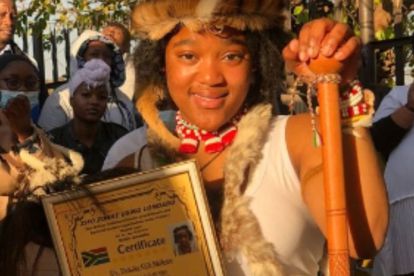 Actress Dakalo Gift Molope, who joined the e.tv soapie Scandal! last month as Dintle Nyathi’s long-lost daughter Motshabi Martins recently opened up about how she juggles acting and becoming a sangoma at 16 years.

The Scandal! actress Dakalo Gift Molope, who viewers know as Motshabi Martins reveals in her interview with Drum Magazine that her life took a turn eight months ago when she had to go to initiation school and become a sangoma.

The rising star also reveals that she recently celebrated her 16th birthday and that she had to make peace with the fact that she is not like other teenagers.

She also tells the publication that she knew she’s always known she was different and that she now has a new name Mkhulu Phahla Metsing.

Molope also feels great to honour her great grandfather and has accepted the calling because of the things he has already done for her.

“Everything that I’ve gotten in life is all because of him, so honouring him for me is something that I can do every day and I don’t mind going through this journey honouring him and I feel so happy serving him.”

HER ROLE AS MOTSHABI MARTINS

Soapie viewers first met Molope as Motshabi aka Mo on e.tv’s Scandal!, as a troubled teenager who kept her identity a secret from her roommates Lindiwe and Nhamulo.

Molope plays a troubled teenager who was adopted by Erin Martins (Lorcia Cooper) who is trying to reconnect with her biological mother Dintle played by Mapaseka Nyokong.

She grew up with her mother Erin Martins who didn’t like her and found out later that she was adopted.

Diehard fans of the soapie became suspicious when Motshabi became obsessed with Dintle and realised that she was stalking her because Mo is the daughter she gave up for adoption when she was in high school.