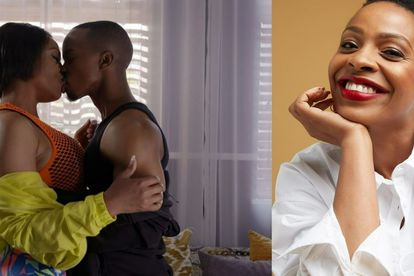 Me’Shell and CeeJay’s relationship has took a turn for the worst. Image via Instagram @officialetvscandal
and @rulerofself

Me’Shell and CeeJay’s relationship has took a turn for the worst. Image via Instagram @officialetvscandal
and @rulerofself

CeeJay (played by Thulani Hlatshwayo) has ended up on the wrong side of the law on e.tv soapie Scandal! This comes after his much older love interest, Me’Shell, left him out to dry in a sex scandal.

Me’Shell (now played by Thuli Thabethe) and CeeJay decided to enjoy their joy ride one last time when Me’Shell’s bodyguard showed up and found the pair in a compromising position.

Me’Shell is a married woman so it came as no surprise when she decided to act as if her personal trainer CJ was doing something she did not consent to.

Her bodyguard believed her lie which prompted Me’Shell to run with it and she has taken it too far. CJ was taken to the Newtown police station where he was questioned about his relations with Me’Shell. He ofcourse maintained his innocence.

His roommate Nhlamulo ended up bailing him out of jail but CJ felt he was being judged for his decisions.

Even Taps, the very person who was encouraging him to cash in on his side business has made it clear that he will not tell the truth about his relations with Me’Shell. The walls are slowly closing in on him and at this point, it seems like no one is in his corner.

Believing that Me’Shell could help unravel the mess, CeeJay makes one last attempt at getting her the truth risking his freedom, he calls Me’Shell.

He asks her why she is doing this to him and Me’Shell bluntly states that he knows he raped her and as such, shouldn’t be calling her.

At this point, it seems CeeJay is losing everything. His licence as a personal trainer has been suspended and if Lindiwe’s reaction is anything to go by, he may soon be homeless.

Me’Shell has left her friend Layla (played by Natasha Sutherland) with no choice but to lie about the encounter she had with CeeJay because how are people going to look at her?

Layla is also worried about her new relationship with Cohen, the detective that is in charge of CeeJay’s case. She has decided that lying is the hill she is willing to die on.