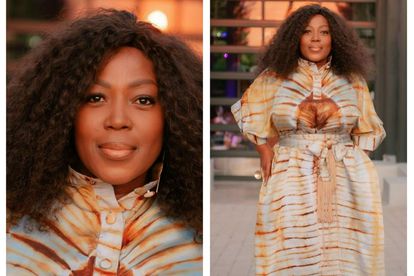 Rami Chuene says he character on Giyani: Land of Blood is trying to be normal this upcoming season. Images via Instagram: @ramichuene

Rami Chuene says he character on Giyani: Land of Blood is trying to be normal this upcoming season. Images via Instagram: @ramichuene

Actress Rami Chuene says people in the entertainment industry should not believe the hype to the point of forgetting who they are.

“I genuinely believe that celebrities and other well-known people need to decide who they want to be when you are own your own. Not everyone will be disrespectful, other people know there is a time and place for everything,” she tells Drum magazine.

The Giyani: Land of Blood actress opened up to the magazine in an exclusive shoot that there is no need for some celebrities to be rude when their fans ask for pictures.

“Even if you are at the airport and you are running late and someone is asking for a selfie, there is no need to be rude and tell them off. Rather tell them under different circumstances you would oblige, but for now, you’re rushing for a flight. That way, even though you have declined their request, you do not come off as rude. That goes a long way with people,” she says.

ALSO READ: Rami Chuene confirms her wedding was for her ‘Giyani: Land of Blood’ role

CONNIVING MANOKO BACK ON ‘GIYANI: LAND OF BLOOD‘

The 47-year-old actress is excited for season three of SABC 2’s Giyani: Land of Blood.

“I cannot wait. I enjoy watching projects that I am part of. I watch them members of the public, I watch then like I wasn’t there. I am not the kind of artist that watches to critique themselves. I watch to enjoy the show,” she told the publication.

Rami says she loves what she does because she believes in the shows she is always a part of.

“…even if my character does something funny, I laugh like it was not me that was acting that part out….I fall in love with the characters I play and how they fit into the entire story,” she explains.

ALSO READ: How it started vs how it’s going: Is Rami Chuene’s daughter on OnlyFans?

Rami says her charcater Manoko is confident and settled now.

“She wants to believe that her problems are resolved and that she wants to focus on her family. She wants to make the family unit work. She wants to be ‘normal’, but her skeletons keep creeping up and trying to bring her down,” she tells the publication.