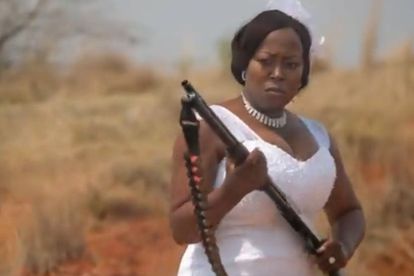 Actress, Rami Chuene, who recently joined the cast of Giyani: Land of Blood to play the role of Manoko, confirmed on social media last night (28 October) that her viral wedding picture was for her new role.

The actress surprised everyone when she hinted that she got married in a secret ceremony on 25 September and had her industry friends play along with her fake wedding.

She posted a picture of herself in a wedding gown on her social media channels with the cryptic caption:

“I also attended a wedding this past weekend.”

She has now admitted that she never got married and thanked all my family and friends for playing along with her fake wedding and tagged Tshedza Pictures, True Love Magazine, and Phil Mphela.

She also said the vibe they caused was beyond her expectations and that her parents got calls from upset relatives.

HER NEW ROLE ON ‘GIYANI: LAND OF BLOOD’

According to TVSA, her new role, Manoko is a mother and a new villain who’s replaced singer-actress, Yvonne Chaka-Chaka’s character Gladys.

The creative director for the show, Nthabi Tau told the publication that Manoko is diabolical.

She married Richard, who has lost his wife Gladys and is using his connections to get ahead.

Tau also stated that Manoko masquerades as a loving wife and dabbles in rhino poaching dealing with shady characters.

She is greedy and will get involved in illegal dealings that will lead her to destroy the very community she saved, according to TVSA.