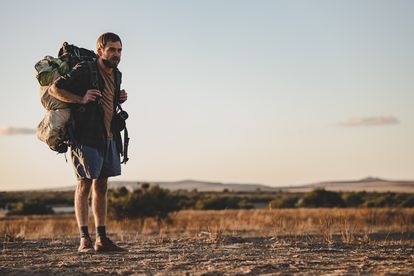 Drama on kykNET continues with the latest series, Nêrens, Noord-Kaap, which will be broadcast on the channel from 31 August 2021.

Originally a play that has won numerous awards (including Best National Debut at the Vrystaat Arts Festival and a kykNET Fiësta award for Best Ensemble work), Nêrens, Noord-Kaap has been developed into a full-fledged drama series, which will be available on kykNET and DStv Catchup, with subtitles.

The story revolves around three estranged brothers who find their way back to the family farm, Nêrens, where secrets, heartbreak, and the truth surrounding their mother’s death threaten the path to redemption.

Lourens Adendorff, farmer and patriarch of this dry kingdom, barely leaves the house anymore – the curtains of his sandstone castle always drawn. His Dutch wife, Katja, has been dead nearly twenty years and all three of his sons have abandoned him.

Frans, the eldest, still runs the farm but barely speaks a word to his father. Ronnie, the middle child, divorced in Cape Town and trying to raise his son from a distance. And Andries, the youngest, their father’s favourite, has shunned them all and has been backpacking around the world for the last couple of years. The family is in pieces, and the farm is stuck, stagnating in time and place.

Nico Scheepers (Die Maan Val Bewusteloos, Posbus 1), who wrote the play, adapted the text for television, with Saartjie Botha assisted with text editing – together they developed the play into a 13-episode family drama. The series is directed by Nico and Johan Cronje (Wonderlus, Meisies wat Fluit, The Day we didn’t meet).

“When writing the stage play I wanted to tap into a specific Afrikaans vein, and to further explore that in the drama series – this familiar world of open skies, love and land that’s written in our heritage,” explains Nico. “In the end, I dedicate it to my own father.”

Dean Balie (who won a kykNET Fiësta Sinjatuur award for up-and-coming artist earlier this year) appears as Jan-Jan (the foreman on the farm) and Ilse Klink (Stroomop, Skemerdans, Arendsvlei) portrays the role of Maggie, who plays an integral role in the raising of the three Adendorff boys. Tinarie van Wyk-Loots, Marion Holm, Gideon Lombard, Ludwig Binge, Patricia Baadjies and Melissa Willering are also part of the stellar cast.

Viewers will also be introduced to a few new faces – Johannes Jordaan, Lehan Swanepoel, and Thommi Swanepoel, who play the roles of the younger versions of Andries, Ronnie, and Frans. Arnold Swart also makes his TV debut as Lourens, Ronnie’s son from his failed marriage.

Nêrens, Noord-Kaap will be broadcast on kykNET (DStv channel 144) from Tuesday 31 August 20:00 and will also be available on DStv Catchup.