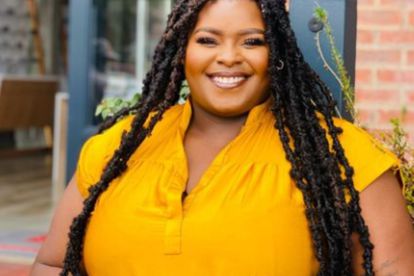 The River actress and TV personality Lebogang ’The Funny Chef’ Tlokana has announced that she’s the new plus one TV host for Our Perfect Wedding.

The Mzansi Magic reality show Our Perfect Wedding returned for the 12th season.

Media personality and comedienne Lebogang Tlokana – who is popularly known as The Funny has scored a TV hosting gig in Mzansi Magic’s wedding show – Our Perfect Wedding.

The River actress will join the current presenter – Nomsa Buthelezi.

“One of the things we’re most proud of and committed to as a channel is giving different creatives the platform to share their talent and energy on new platforms.”

“From the onset, Our Perfect Wedding has been one of the leaders in this regard: it has continued to refresh itself with an interesting and versatile range of presenters, all of whom have connected with viewers in their own way.”

The show took to their social media accounts to confirm that The Funny is joining the show.

“Keeping in line with our tradition of continuously refreshing the show with versatile presenters.”

“We are proud to announce that Lebogang Tlokana @Thefunnychef joins Nomsa ‘Gomorrah Diva’ Buthelezi–Shezi this season!”

Each week, one engaged couple on the show takes the journey to the altar.

The couples are interviewed by the TV hosts and tick off all the items on their wish lists and declare at the end of the show that they had their perfect wedding.

Our Perfect Wedding airs on Mzansi Magic (DStv channel 161) on Sundays at 7 pm.