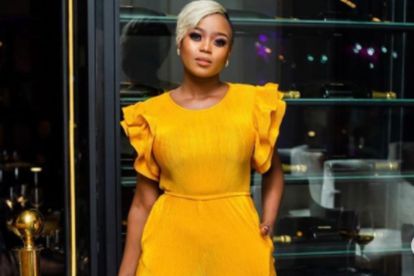 Muvhango actress Mulisa Mudau – who plays Elelwani on the soapie has bagged a TV hosting gig Squad Goals on SABC 1.

IOL has reported that the new show will premiere on SABC 1 tonight at 9 pm.

Squad Goals is a fitness competition show which will see 15 contestants embark on a lifestyle change.

The contestants are made up of five squads; an overweight, a middleweight, and an underweight contestant who will try to reach a milestone or individual goal that will ultimately transform their bodies.

They aim to live a healthier lifestyle – with the help of fitness trainers, a doctor, and a healthier diet.

Mudau too to her Instagram to announce her new gig:

“When God shows up he shows off.”

“If you don’t believe that dreams come true may my life be a testament to you that God is a man of his word.”

“I cannot wait for South Africa to see this masterpiece.”

“My name is Mulisa Mudau here in my lane living my dream️ I am your host @squad_goals_sabc1”.

The actress is popularly known for playing Mulalo’s side chick Elelwani on Muvhango,

Mudau’s character Elelwani dated and fell in love with Mulalo – when his wife Tebogo Mukwevho – was sentenced to prison.

She is also a waitress for Mukondelini’s restaurant in Waterside and recently started working for Tebogo to get rid of his new girlfriend Belinda.

Mudau is also known for her field presenting gig on Real Goboza, and her role as Enhle on Showmax’s series – Tshepo.

The media personality has also appeared in SABC 1’s sport’s show – Sports at 10 with Thomas Mlambo.