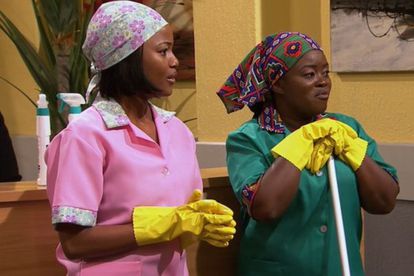 Muvhango’s fan-favourite character Susan will get arrested and jailed after Tenda frames her for the murder of the former mayor. The TVSA August teasers reveal that Tenda will set her up for the murder of the former mayor when she refuses to work with him. The teasers also reveal that Mpho will get a vision that shows her that Rendani is meant to thwasa (sangoma training) and become her assistant as a sangoma.

Muvhango viewers will be devastated when popular character Susan (Maumela Mahuwa) will go to jail for the murder of the former mayor, who was killed by Tenda (Gabriel Temudzani) in June. Tenda will frame her when he doesn’t get his way with her and the body of the former mayor will be exhumed. Fan-favourite character Rendani’s life will change completely when Mpho calls her to work with her as a sangoma.

‘MUVHANGO‘: MPHO HAS A VISION ABOUT RENDANI

Rendani (Innocentia Makapila) will be shocked to learn from her former sister-in-law Mpho that she’s meant to thwasa and become her spiritual guide.

This revelation will be a complete turnaround for her as Rendani currently works for Susan in Thate as her campaign manager.

Rendani left her job as an accountant at MMC and moved to Thate to assist her family and never left. Mpho’s (Azwimmbavhi Rambuda) vision will mean that she’ll have to move back to Johannesburg and possibly work at MMC again.

“Mpho gets lashed in her dreams.”

The teasers also reveal that Tenda will get worried about Mpho when she starts talking to herself and doesn’t understand what the ancestors need from her.

“Mpho learns that Rendani is ithwasa and that she is meant to be her spiritual guide.”

BIG REVEAL: Viewers of the SABC2 soapie should also know that Rosemary will skip bail and escape prison for trying to steal Gugu’s life.