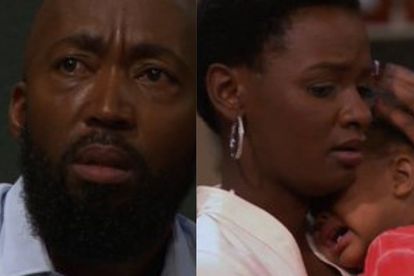 Tenda will punish James and Imani when he finds out that Moipone kidnapped his baby at the hospital. Images via Twitter @MuvhangoSA

Tenda will punish James and Imani when he finds out that Moipone kidnapped his baby at the hospital. Images via Twitter @MuvhangoSA

Things are about to heat up between Tenda and Mpho and James (Dingaan Mokebe kaKhumalo) and Imani in Muvhango this February.

Baby Kenosi’s parents – Tenda and Mpho are about to find out that James’ mother – Moipone is the one who kidnapped their baby at the hospital.

JAMES AND IMANI GET CAUGHT IN THE LIE

Muvhango’s Tenda is currently down and out at home after James kicked him out of MMC…but he won’t be down for long.

TENDA AND IMANI ARE REUNITED WITH BABY KENOSI

Viewers of the soapie will be elated to see Baby Kenosi reunited with her parents after the writer’s dragged the storyline for months.

Fans also don’t understand why Imani and James have not shared the latest development in the kidnapping case.

Mpho and Tenda (Nathaniel Ramabulana) made a video statement last night and asked the public to help them locate their missing baby.

“Tenda is told the truth about where his baby is.”

And the Monday 14 February teaser reads: