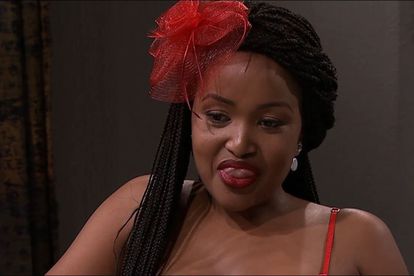 Muvhango’s Tebogo (Liteboho Molise) isn’t one to share a man or get cheated on…We learnt about her dark side already years ago when she first attempted to kill Thandaza (Sindi Dlathu).

Tebogo a dangerous force to be reckoned with

Thandaza was married to Ranthumeng (Brian Themba) who had a baby with Tebogo and when Tebogo realised that he that he was not planning on leaving Thandaza for her, she tried to run Thandaza over with a car.

Thandaza had to drop the charges because of lack of evidence, but everyone knew it was Tebogo.

Tebogo eventually moved on with Mulalo who was head over heels in love with her. She warned him from the beginning of their marriage though that she doesn’t want to share her man with another woman.

Mulalo however still cheated on her and impregnated Shumi (Carol Netshitungulu) and then went as far as convincing Tebogo to enter into a polygamous marriage with him and Shumi.

This only lasted for a couple of months because Tebogo just couldn’t handle the competition posed by another woman in their marriage.

THE END IS NIGH FOR TEBOGO AND MULALO

Tebogo suspected that Mulalo is cheating on her again and followed him to his meeting with “Amos” last week.

She spotted Shumi and her husband in bed at a hotel and listened in to their conversation, and said nothing, and did nothing.

#Muvhango Twitter pitied her for the first time as she sat there watching her husband make love to another woman.

What angered #Muvhango on Twitter the most was when Mulalo told Shumi that he prefers her over Tebogo because he feels safer with her.

WHAT IS TEBOGO PLANNING?

The old Tebogo would’ve let Mulalo know that she is aware of him and Shumi seeing each other behind her back. And by now, Shumi would’ve already been out of town fearing for her life!

But Tebogo didn’t say a word about what she saw the next day to Mulalo, which is even scarier. She just asked him where he was the night before and said she was sad he missed his favourite meal.

According to the teasers, Mulalo will confess to having an affair with Shumi on tonight’s episode and Tebogo will torture him on tomorrow’s episode.

And then, Tebogo will surprise everyone on Wednesday when she invites Shumi to move into the royal house…