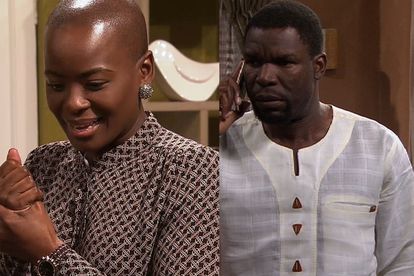 Gugu (Bukamina Cebekhulu) and Azwindini will declare feelings for each other after getting stuck underground in a mine, according to the TVSA November teasers.

This is after Azwindini’s wife, Susan, assaulted her for being in a relationship with her son, Vutshilo (Wavhudi Lidzhegu) who is also her intern at MMC.

The teasers indicate that Gugu and Azwindini (Gabriel Temudzani) will be convinced they are dying as they are trapped underground.

It is unclear from the teasers if the pair will confess feelings for each other because they are really in love or because of their near-to-death experience underground.

Vutshilo will be heartbroken if Gugu and Azwindini start dating once they’re rescued because he has fallen in love with her.

KK (McDonald Ndou) will attempt to commit suicide when he realises what a terrible father he has been to his son, Kgosi (Tebatso Mashishi).

IMANI TO THE RESCUE?

Imani (Zonke Mchunu) will unknowingly reconnect Mpho (Azwimmbavhi Rambuda) with her baby that was kidnapped at the hospital, when she asks her to babysit baby Keniso on Friday, 5 November.

Mpho is a powerful Sangoma who uses her gifts to heal people and connect the living with the dead.

The teasers indicate that Mpho will get attached to the baby in November, but don’t indicate if she will learn the truth about baby Keniso’s real identity.

Will Imani help her get the baby back when she realises that her husband’s mother, Moipone (Mmabatho Mogomotsi) kidnapped Tenda and Mpho’s baby?