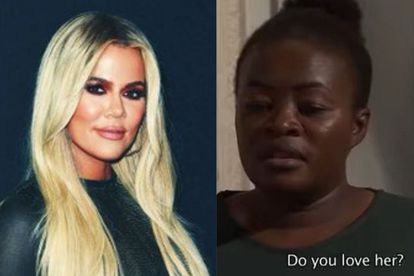 Muvhango viewers are comparing Susan Mukwevho to Khloe Kardashian and Azwindini with Tristan Thompson. Both women are faithful to their cheating partners.

#Muvhango want both women to leave their partners and move on with their lives.

‘AT LEAST SUSAN IS ACTING’

Fans of SABC 2’s Tshivenda soapie – Muvhango are saddened by Susan’s decision to stay with her cheating husband – Azwindini just like Khloe is with Tristan.

This is after Azwindini (Gabriel Temudzani) cheated on Susan for the hundredth time with his son’s girlfriend – Gugu and has now filed for divorce.

But Susan refuses to sign the divorce papers because she wants to make his life difficult with Gugu (Bukamina Cebekhulu).

He wants to divorce his wife of twenty years because Gugu threatened to leave him if he doesn’t divorce her.

Also read:‘Dude is corny for that’: Lamar Odom reacts to Tristan cheating on Khloe

Audiences have stated that at least Susan is acting, unlike Khloe Kardashian who is being cheated on publicly by her baby daddy Tristan Thompson.

NBA star Tristan Thompson trended on Twitter yesterday (16 January) because Twitter users were outraged that Tristan may have been invited to Chicago and Stormi’s joint party after he cheated on Khloe yet again.

The NBA star impregnated a second woman while romantically linked to his baby mama – Khloe.

Fans of the reality star believe she’s got low self-esteem and doesn’t think she deserves better after she allegedly took him back.

“No Khloe, she’s still paying for all the tears she’s brought, other women.”

“But ke Susan definitely does.”

”When will Susan have a new boyfriend?”

“Susan must get someone to make her feel young again.”

“Azwi must-see flames for once.”

“I have never been so angry with Muvhango writers as I am right now.”

“Susan has suffered for such a long time now.”

Also read:‘Muvhango’: Why Susan Mukwevho and KK Mulaudzi are a perfect match