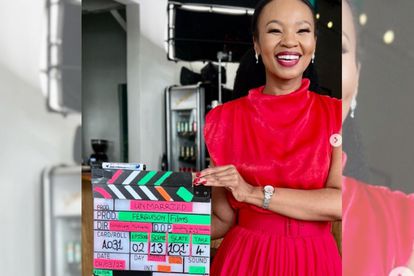 Former Generations actress and Gomora producer Lulu Hela opens up about her journey from acting to producing.

Hela who got her acting break by playing bad girl Belinda Nhlapo on Generations well over a decade ago says her success wasn’t instant or overnight.

Former Generations actress and Unmarried actress Lulu Hela – who recently got promoted as Gomora’s executive producer has revealed that this promotion feels like a pat on the back.

Hela who’s been in the entertainment industry for over two decades tells Drum Magazine:

“It affirms that I am on the right track, it is a big deal to me. With 22 years in the industry, it feels as though all the commitment and sacrifices are paying off.”

She also acknowledges that this is a big win for women in the industry that is still very male-dominated.

“It really propels all of us forward. I believe the more of us are on this level, then the louder our voices will be.”

She acknowledges the many black women who gave her opportunities to learn and showed her the ropes and says she’d like to do the same for others.”

ALSO READ:Entanglements in ‘Gomora’, ‘The River’ and ‘Scandal!’

FROM PRODUCING ‘ZOLA 7’ TO ‘GOMORA’

The actress-producer also reveals that even when she was on Generations or shooting White Wedding she was doing behind-the-scenes work on other shows like Zola 7.

“I have worked on all levels of production and it is a space I never thought I would flourish in, but here we are.”

“Even to this day people still come up to me and call me Belinda and I find it so funny because it was such a long time ago.”

Lulu says every project matters because they all align to lead you to your destination.

She’s also worked on shows such as Isithunzi and Class Act and many more.

She takes her new role at Gomora very seriously and says her approach is very unconventional, but it gets the job done.

“I do not try to be a man. I like my soft, empathetic approach. In everything I do, I move from a place of wanting to serve. So even on set, I always look at how best I can serve. If a person needs to unpack the script, have a good cry in my office, talk about how the script is triggering them, I am available for all of it and when we are done, they give the performance of their life on camera. Then I feel like my job is done.”