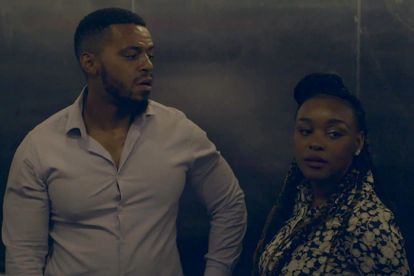 Skeem Saam viewers were taken by surprise last night after the show aired its first on-screen kissing between businessman Lehasa Maphosa and his business associate, Nothile.

Things got pretty heated between Lehasa (Cedric Fourie) and Nothile (Mbalenhle Mavimbela) when they got stuck in an elevator for hours.

Viewers saw the rivals arguing in the beginning of the scene…and getting intimate towards the end.

Although their kissing scene was short and interjected by the security guards when the elevator eventually opened, fans enjoyed watching the first kiss.

Some fans didn’t as Lehasa’s baby mama has been going through a terrible experience.

Pretty (Lerato Marabe) was at a dodgy abortion clinic alone last night trying to get rid of the baby.

She wanted to get rid of the baby yesterday because her mother, Mantuli (Dieketseng Mnisi), is coming back today (16 September) from KwaZulu-Natal.