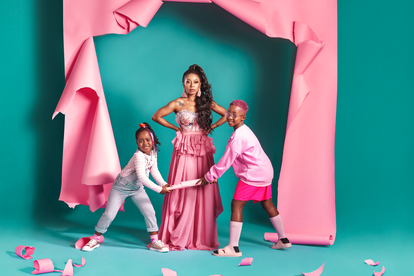 “Fans have been asking for Season 2 of Life With Kelly Khumalo since it first aired last August, so we’re delighted to be able to deliver it nine months later,” says Candice Fangueiro, Showmax’s head of content. “Life With Kelly Khumalo became the fastest Showmax Original to top one million views, so renewing the series was an easy decision to make.”

Since season 1, the South African Music Award winner has launched her eighth studio album, The Voice of Africa, featuring the hit single Empini, which has already racked up nearly seven million views on YouTube alone. As Somizi said at her private listening session for the album, “In my books, Kelly is the best female vocalist we’ve ever had in our time.”

Based on the new trailer, the two biggest talking points this season will be Kelly starting to date again, and the return of her mother, Ntombi Khumalo.

“I’m not in a relationship; I am playing with someone.”

Since her last public break-up, Kelly has shied away from matters of the heart and channelled all her energy into being a mother, musician and businesswoman.

But in the Season 2 trailer, Kelly admits, among other things, “I’m not in a relationship; I am playing with someone…”

“She is the only family member I have left.”

The sudden disappearance of Kelly’s mom in season 1 left her heart-broken and confused. After Kelly asked about her biological father, Ntombi abruptly left for KwaZulu-Natal. They drifted even further apart over Kelly’s ongoing feud with her younger sister, Zandile.

But in the season 2 trailer, we see that Ntombi has returned, and Kelly suggests a visit to a psychologist. “She is the only family member I have left; I feel like I owe it to myself and my children to try and make this work,” says Kelly.

“With the new season, Kelly is going through a healing process from all she encountered in season 1,” says executive producer Legend Manqele, founder of The BarLeader, the production company that is also behind Being Bonang, Somizi & Mohale: The Union, and Kwa Mam’Mkhize. “Kelly is trying to take in everything at her own pace. But in the same breath, the answers she was seeking have now opened up more questions that need answering, which not only affect her but also her kids in the long run.”

Despite everything she went through in season 1, Kelly says she found it empowering to open her life up to her fans via reality TV. “My reality show is my way of owning my reality and embracing who I am,” she says. “What I’ve learnt is that it gives me power to own my story. No one can ever use my story against me because I have owned it. This is me, who I am, whether good or bad.”

The 13-part series starts screening next Thursday, 13 May 2021, with new episodes every Tuesday. The full second season will be available to binge from 5 August 2021.