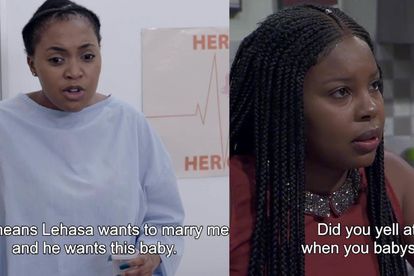 ‘Skeem Saam’ actors Lerato Marabe and Mogau Motlhatswi reveal they were attacked by fans as Pretty Seakamela and Mapitsi. Images via Twitter @SkeemSaam3

‘Skeem Saam’ actors Lerato Marabe and Mogau Motlhatswi reveal they were attacked by fans as Pretty Seakamela and Mapitsi. Images via Twitter @SkeemSaam3

The actors revealed their character’s favourite storylines, episodes, getting attacked by fans and landing their roles in season one.

Also read: Did these characters from ‘Skeem Saam’, ‘Scandal!’… get replaced?

Lerato Marabe who has been with Skeem Saam since season one, says she remembers her mother hugging her when she first heard she landed the role of Pretty Seakamela.

Marabe also told TVSA that her most treasured storyline was when Leshole (Thabo Mkhabela) catfished Pretty.

“The best scene was when Leshole and Pretty had to fight at the tuck-shop.”

“I remember I had chills down my spine because I didn’t know how it was going to pan out.”

She also says they had many takes that day, but the scene came out beautifully on TV in the end.

Actress Mogau Motlhatswi, who plays Mapitsi on Skeem Saam, reveals that she was in her first semester at varsity when she received the call to join the show.

The actress said her top three treasured storylines include her character giving birth to her son, Pitsi.

“It was absolutely magical and I can’t wait to go through that in real life.”

Motlhatswi also says her storyline about Wallet’s missing coin was also her favourite as it made her think about our values as a people.

Her third favourite storyline was when Mapitsi and Thabo Maputla (Cornet Mamabolo) got married recently (October).

“I am so blessed to have been cast with such an understanding and patient actor for such an emotional storyline.”

Lerato Marabe’s most unforgettable off-camera moment was when a cashier slapped her across the face and told her to stop abusing Leshole.

Mogau Motlhatswi’s worst moment off-camera moment was when a fan almost attacked with a knife at an even for breaking Tbose’s heart.

“Mapitsi threw Tboses’ ring out the window. That was just a lot.”