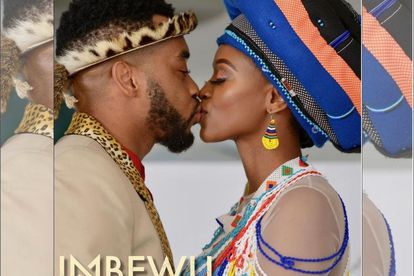 Viewers of e.tv’s Imbewu: The Seed saw fan-favourites Zithulele and Nokuzola finally getting married in a Zulu traditional wedding over the past two days (1 September and 2 September).

Fans of the show weren’t certain the newlyweds would make it to the altar after Zithulele (Raphael Griffiths) cheated on Nokuzola (Vuyiseka Cawe) with his previous girlfriend Boniswa (Pearl Khwezi).

Zithulele cheated on her after he found out that his fiancée had a one-night stand with his half-brother Nkululeko (Nkanyiso Mchunu) before they even met.

Also read: For crying out loud: It’s baby season on ‘Imbewu: The Seed’ this month

‘WHERE DO BROKEN HEARTS GO?’

The pair will definitely split when the truth is revealed as Nokuzola aborted Zithulele’s child before and Zithulele despises his half-brother Nkululeko.

Nokuzola might also resign from her husband’s family where she is a lawyer as she would be too embarrassed to deal with the consequences of her actions.