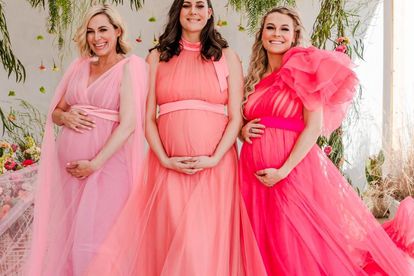 Their pregnancies were revealed by former Isidingo actress, Jay Anstey who shared their pregnancy photoshoots on her Twitter and Instagram accounts.

Anstey jokingly apologised to her production company, Tshedza Pictures, as all three sisters are about to give birth and take maternity leave.

“Ok, another surprise. Yes. All three Price sisters are pregnant.”

The actress also revealed that their pregnancies were not planned and stated on her Instagram account that they’re all expecting baby girls soon (December or January).

“It wasn’t planned but it is a miracle!”

Jay Anstey is expecting her first baby with her partner and co-star, Sean-Marco Vorster, who plays the role of Stefan Potgieter on the show.

Anstey’s best friend, Reandi Grey, is expecting her second baby girl with her husband, Dewald Grey, and their on-screen older sister, Mary-Anne Barlow, is having her first baby.

The actresses stated that they cannot wait for playdates and their girls to all be best friends (even if they don’t want to).

REACTIONS FROM ‘LEGACY’ VIEWERS AND CELEBRITIES

Viewers of the telenovela are thrilled for the Price sisters and are wondering if the trio’s pregnancies will be written into the Legacy storyline.

The trio received congratulatory messages from fans of the show, co-stars, and industry mates on Anstey’s social media accounts.

“We’re so blessed, and we can’t wait to meet our little Princesses!!!”.

”It must be the water served on the #LegacySA set or something.”

“Congratulations to you all and your partners. May this new chapter bring you all the happiness. “