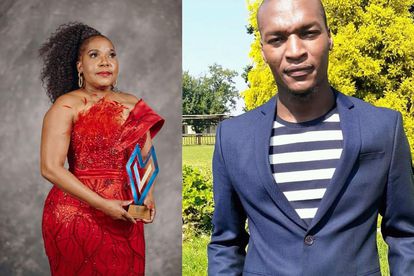 ‘I spent writing Gomora because of Sannah Mchunu’: Chris Radebe. Images via Twitter @fortune_r and @joy_zelda

‘I spent writing Gomora because of Sannah Mchunu’: Chris Radebe. Images via Twitter @fortune_r and @joy_zelda

Isibaya actor Chris Q Radebe, who recently exited Gomora as their head writer took to his Instagram account yesterday (27 June) to join millions of South Africans who congratulated award-winning actress Sannah Mchunu for bagging the DStv MVCA’s Favoruite Actress award for her role as Zodwa in the telenovela.

CHRIS RADEBE: ‘I WANT TO THANK YOU SANNAH MCHUNU’

The actor-writer Chris Q. Radebe who made headlines this month after Gomora replaced him with writer Chisanga Kabinga penned a lengthy post to the DStv award-winning actress Sannah Mchunu, who plays Zodwa on the show.

Radebe thanked the actress for giving him a wonderful journey at Gomora and also gave his followers a glimpse of what it’s like working with the talented actress.

“If you ever needed proof that God’s timing is impeccable or that hard work pays off, look no further. If you watch Channel 164 as frequently as I do, you’ll know that Sannah Mchunu has been on a few Mzansi Bioskop films for more than 10 years. But it was only with the arrival of Gomora that many were introduced to her remarkable talent.”

“I want to thank you @sanamchunu7 for making me enjoy my job for more than a year. Writing a telenovela is extremely challenging for me because of my style of writing. But I absolutely enjoyed every second I spent writing Gomora because of you. And I’m confident that the stellar new team under the leadership of the brilliant Chisanga will bring out your absolute best, which I believe is yet to come.”

The actress recently told TshisaLIVE that she was grateful for the opportunity to show her acting skills as an actress.

“I have had so much fun acting on Gomora, I am allowed to play and explore the character of Zodwa the way I want to. It has been an absolute pleasure.

“I have shared spaces with the amazing industry people and I get to play with Mam Connie Chiume [Sonto], who has also done phenomenal work in the industry. I receive a lot of love on the streets and everywhere I go.”