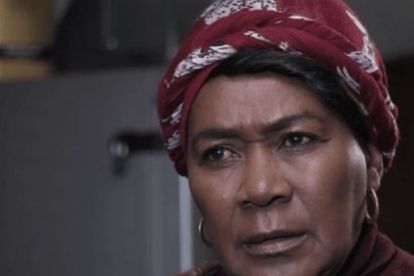 Actress Connie Chiume who plays the role of MamSonto on Gomora has returned to the show after temporarily exiting the show to film Marvel’s Black Panther: Wakanda Forever in the United States.

The actress announced her return to the telenovela on her Instagram account last month with the picture of herself on the set of Gomora.

Chiume hasn’t appeared on Gomora since she was shot at her workshop by Don’s rival and placed in a coma by doctors.

Her daughter Thati (Katlego Danke) sent her away to a hospital in Cape Town after Don (Israel Zulu) threatened to finish her off while she was lying in hospital.

The writers sent Chiume’s character away so that the actress can film the Black Panther sequel, Black Panther: Wakanda Forever.

Also read: Is Connie Chiume in the US to shoot ‘Black Panther’ sequel?

WHY MAMSONTO’S RETURN WILL BE THE END OF DON

Don took over MamSonto’s hijacking operation and started working in her workshop when she turned a new leaf in season two.

Also read: ‘Gomora’ Review: Why Robert Mpisi (London) got killed instead of Don