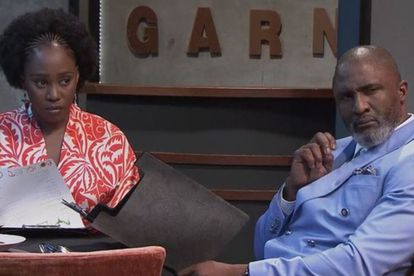 Generations:The Legacy’s Sphe will break up with her on-and-off boyfriend – Luyolo when she finds out he betrayed her uncle – Nkosi, which led to Kabisi’s win.

Nkosi will win the war against Kabisi Moroka and take over #Ezweni.

NKOSI WINS HIS WAR AGAINST KABISI

Kabisi will be forced to swallow his pride next month when he figures out that Sphe’s uncle – Nkosi paid his PA to sleep with him.

Nkosi paid Thembeka to recorded herself and Kabisi having sex and will share his intimate moment with the #Ezweni board.

Kabisi will finally learn that his PA Thembeka (Rosemary Zimu) – is also a prostitute who was paid by Nkosi.

Nkosi is fighting dirty so he can become the chairman at #Ezweni Communications.

“It’s a bitter pill for Kabisi to swallow his pride.”

“What happens at the board meeting leaves Ayanda (Samela Tyelbooi) reeling.”

SPHE LEARNS THE TRUTH ABOUT LUYOLO

Sphe (Pearl Monama) is about to find out that Luyolo (Karabo Maseko) is not as honest and as loyal as he pretends to be.

Luyolo shared confidential information about Kabisi to Pamela – the journalist which led to Kabisi winning the first round against Nkosi in the boardroom.

The TVSA teasers suggest that Sphe will dump him and move on with a new man in February.

“Luyolo reaches out to his ex but it doesn’t go as planned.”

Her new man will play the role of Winston according to the teasers though it is unclear who the actor is at this stage.

Watch more storylines from Sphe and Nkosi Cele on SABC1, Monday to Friday at 20:00!