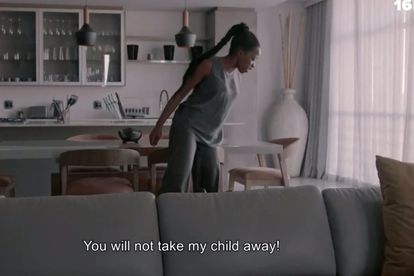 She began taking self-defence classes in previous episodes when her husband Simo started abusing her.

They were also impressed with actress Ayanda Borotho, who made her production debut on the show as the writer, producer, and creator.

Borotho expressed her gratitude on social media, and stated that she enjoyed writing the episode and was sad that the show is ending.

“I absolutely enjoyed writing this episode.”

“I wish I could tell you how divine this project was for us @avadmedia_Za.”

“You bet there’ll be a chapter called ‘Nqobile’ in my next book.”

Nqobile is an ill-treated makoti of the Nkosi family dynasty who manages to outsmart her entitled, abusive husband and take over his empire.

She transforms the business into a women-led e-hailing service, and with newfound grit, indirectly declares war against her spouse.

The show highlights a woman’s quest to rise above marital abuse and begin to live fearlessly.

Viewers have seen her thrusting into a male-dominated industry and have seen her negotiating her freedom while maintaining respect.

Nqobile will want nothing to do with her grandmother Black Widow, according to Mzansi Magic teaser for next Monday (27 September).

The Nkosi mansion will be put up for auctions and the company will start the process of liquidation.

The last episode of Nqobile will air next Monday (27 September) as the hit drama series will be replaced by Grootboom and Sons which will air on Mzansi Magic from 4 October.

Springboks vs All Blacks: Every result in the greatest rivalry

Father and his two sons arrested for kidnapping