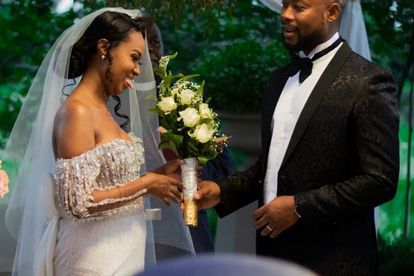 Popular actress and beauty queen Phuti Khomo has returned to the small screen as Sharon on 1Magic’s Entangled alongside Vuyo Dabula and Vuyo Ngcukana.

The seasoned actress’s character is a mother of one with two baby daddies called Sizwe and Julius.

PHUTI KHOMO: ‘I MISSED BEING ON SET’

The actress told SunBuzz in an interview that she didn’t know how much she missed acting until she was in front of a camera.

“Getting back into television space has been something I have been meaning to do ever since I took the conscious decision to take a break and focus on my businesses.

“I missed being on set.”

Khomo who is popularly known for her Muvhango role as Carol Chabeli and Skeem Saam role as Naniki Jones hasn’t appeared oN TV  in four years.

She also tells the publication that she was too busy with her non-profit organisation Tsoga Mo Afrika, to do any TV work.

“Opportunities presented themselves, but I never pursued them because my focus was on my businesses.”

“But right now, they’ve grown to a point where they don’t need my constant supervising.”

Former Generations: The Legacy actor Vuyo Dabula who played the role of Kumkani Phakade plays the role of Julius in the 1Magic sitcom Entangled.

Julius is Sharon’s ex-boyfriend who shows up out of the blue to threaten everything Sharon and her fiance Sizwe (Vuyo Ngcukana) have built.

The actor confirmed his exit from his role in Generations: The Legacy late last year and announced his new role on the 1Magic.

He and Sharon have a son together and are about to get married when Dabula’s character shows up. The trailer also reveals that Sharon both Julius and Sizwe are her son’s baby daddies.

It appears that Sharon is torn in two when her ex-boyfriend shows up and that she might not marry Sizwe.