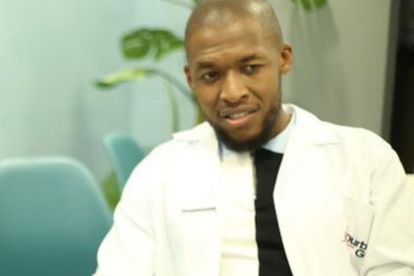 Seasoned actor Nyaniso Dzedze who’s known for playing arrogant characters on TV says he’s not like the characters he portrays.

The Eastern Cape-born actor recently revealed that he used to think that people don’t like him.

Talented actor Nyaniso Dzedze who’s been in the acting industry for over a decade recently revealed in an interview with Daily Sun that he’s nothing like the characters he plays in soapies.

“People think I am the kind of person that is full of himself and has a terrible attitude. Even my family was shocked to see me play these characters on TV.”

He adds that sometimes fans fear to approach him when they meet him in public because they think he would show them a bad attitude.

“I would talk to them so that they can get to know Nyaniso.”

He reveals that his new doctor role isn’t perfect even though he’s different from his previous characters.

“Dr Dlomo understands that people want Durban Gen to be perfect but those who are expected to save lives also have their personal problems.”

He hasn’t relocated to Durban yet where the telenovela is being shot because he didn’t think the role would be as broad as it’s becoming.

The star married Yana Dzedze in 2018 flies back and forth between Johannesburg and Durban.

SOME OF HIS TV ROLES

Dzedze played the role of a psychopath in Rhythm City as Gift.

He also played Jack Mabaso’s hitman and bodyguard Luzuko in Generations: The Legacy.

The actor is also known for playing Tsietsi Namane in Ashes to Ashes seasons one and two.

He currently plays the character of an arrogant doctor in Durban Gen as Dr Dlomo.

Newspaper front pages from around the world, 28 November 2022