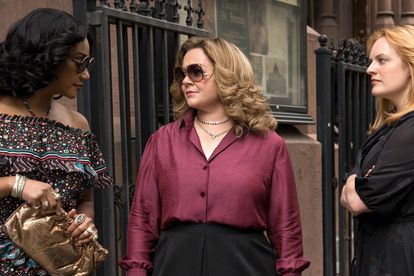 As we hit the middle of May, there’s no better time to get cosy and settle in for winter with DStv’s terrific line-up of movies and television shows. With a mix of old and new, here’s what you can look forward to this week.

Did you know that many of Nickelodeon’s top stars are also musical talents? NickToons (DStv channel 308) is a weekly link-and-clip show that features family-friendly music from the main Nickelodeon channel. Produced locally with local young talent as hosts, tune in for good, kid-friendly beats.

Saturday afternoon just got a lot more curious for the kids! Join George and Ted in Curious George: Go West, Go Wild on M-Net (DStv channel 101). The animated film sees the well-loved monkey and his friend head to a farm where they must learn new cowboy skills in order to fix an accident caused by George’s curiosity. Later that day, on M-Net Movies 1 (DStv channel 104), Mr Popper’s Penguins may make your kids want a pet of a different kind.

Also on Saturday, History Channel (DStv channel 186) continues its Icons of Music special with Ozzy Osbourne: Throne of Darkness. Before he was Kelly and Jack’s dad, and the warbling crooner of days gone by, Ozzy was a true rocker – one that even went so far as to bite the head off a live bat!

On M-Net (DStv channel 101), The Kitchen sizzles as this week’s Sunday night blockbuster. Melissa McCarthy (Spy and Gilmore Girls), Tiffany Haddish (Night School) and Elisabeth Moss (The Handmaid’s Tale) star as three hard-core girl bosses who take over the family business when their Irish mobster husbands are arrested and sentenced to prison in 1970’s New York.

After the Sunday night movie, flick to Comedy Central (DStv channel 122), which pilots Mark Normand’s first stand-up special with Amy Schumer. In Amy Schumer Presents: Mark Normand: Don’t Be Yourself, Normand takes centre stage with life-long advice to not be himself. While hilarious, his inner reflections are tinged with real-life moments we can all relate to.

This week also has loads of amazing television shows. After 32 years as a border control officer, Ben Clemens’ world is turned upside-down when his loyalties and perspectives shift in the new series Coyote on Universal TV (DStv channel 117). In Salon Battle, the ultimate beauty showdown pits contestants from South Africa, Kenya and Nigeria against one another to create a beauty bombshell. The catch? There’s a time limit. Can these skilled technicians pull off the perfect look before the clock runs out?

This year sees the 104th edition of the Giro d’Italia, a three-week Grand Tour cycling stage race. Having started on 8 May, tune in from Friday, 14 May, for Stages 7 to 12 on SuperSport Variety 1 (DStv channel 206).

There’s more TV, movies and sport to be explored – only on DStv. Plus, exclusive content awaits at your fingertips – simply download the DStv app for Apple or Android then watch your favourite shows on your phone or tablet – anytime, anywhere!

The ultimate beauty competition where salons from three different countries on the African continent duke it out to show off their amazing skills. This exciting new series sees beauty technicians from Kenya, Nigeria and South Africa race against the clock and each other to pull off the perfect look. Will they be able to create a beauty bombshell in the nick of time?

Curious George and Ted play cowboys in this feature-length animation. The pair are asked to farm-sit and look forward to relaxing, fishing and bonding with wannabe cowboy Emmett. Things get wild when Georg accidentally lets the farm animals escape and the trio must ensure every animal is returned safely using their newfound cowboy skills.

Set in New York City during the 1970s, three Irish mobsters are arrested during a bank robbery and are sentenced to three years in prison. Left on the outside, their wives band together to take over their businesses, creating a stronghold for themselves. Starring Melissa McCarthy (Spy and Gilmore Girls), Tiffany Haddish (Night School) and Elisabeth Moss (The Handmaid’s Tale).

Veteran actor Michael Chiklis (Fantastic Four, The Shield) stars as Ben Clemens who’s been working as a border control officer for 32 years. When Ben discovers a tunnel used for smuggling and starts working for the other side, he’ll be forced to make decisions that go against everything he’s ever believed in.

In this week’s Icons of Music, we explore the dark and often crazy world of Ozzy Osbourne, who’s definitely not your typical rockstar. Who can forget that infamous moment in 1982 when the self-proclaimed “Prince of Darkness” bit the head off a live bat during a concert in Des Moines, Iowa? Known to be the physical embodiment of rock and roll and already 73 years old, trace his musical career from his days as the lead vocalist of the heavy metal band Black Sabbath to his hilarious moments on his family’s reality show, The Osbournes.

In the comedy special, Amy Schumer produces and makes an appearance in Mark Normand’s first stand-up comedy show. Having toured as Schumer’s opening act for years, it’s time for Normand to shine as he takes a comedic and sharp-witted look at his life – from his drinking habits and catchphrase to his own thoughts and anxieties. Throughout it all, he’s anchored by the advice he’s been given his entire life: Don’t be yourself.