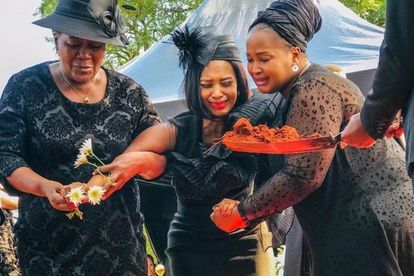 We take a look at storylines that had us glued to Mzansi Magic’s Gomora: From Melusi’s love triangle with Gladys and Thati, Mazet’s shooting, Don’s death and Zodwa indecisiveness to Langa’s death.

Gomora has kept viewers glued to their screens with their incredible storylines this year from Melusi’s cheating scandal with Thati, Don’s love triangle with Zodwa and Bongani, Gladys’ abortions and miscarriage to Langa’s funeral service.

Langa’s death shocked fans because actor, Siya Xaba was one of the most talented cast members on the show.

Xaba revealed in an interview that he wanted to leave so that he can explore his other talents.

Viewers were also glued to the screen when Melusi continuously cheated on his wife, Gladys played by Thembi Seete.

#GomoraMzansi fans were also devastated when legendary actor, Israel Matseke-Zulu got written out of the show last month (November).

The actor revealed that he was struggling with gangrene and asked producers to write him out.

Fan-favourite character, Mazet got shot by Don when she tried to stop him from shooting Ntokozo (Ntobeko Shishi).

Mazet (Siphesihle Ndaba) was hospitalised after the shooting and was told by doctors that she is disabled and won’t be able to walk again.

Viewers are hoping that Mazet will be able to walk again as they’re unhappy with her current condition.

Gladys forgave Melusi for cheating on her with Thati after they broke up and he begged for forgiveness.

Melusi also forgave Gladys for killing his son, Langa after he found out that Thati was responsible for Gladys’ miscarriage.

Viewers still want Melusi (Zolisa Xaluva) and Gladys to break up as they feel that she deserves better than him.

Thati (Katlego Danke) broke up with Melusi and threw him out of her apartment after he found what she did to Gladys.

She has now moved on from Melusi and is currently dating her brother-in-law, Phumlani (Buyile Dladla).