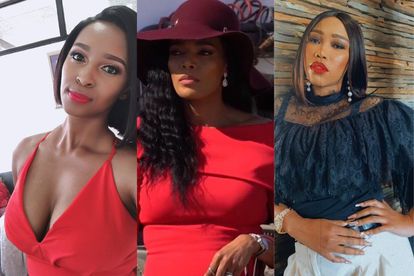 Watching two characters fall in love can be predictable and boring but watching another character place a wedge between a couple is downright entertaining.

Here are four romantic storylines from four soapies that centre around affairs:

Viewers expected Zola (Sonia Mbele) and Mgedeza to hit it off right away when she joined the show last month because they have a lot in common.

Mgegeza is married to Maureen (Vele Manenje) who is expecting their first child and just found out that he’s cheating on her.

She threatened to leave him last night after Zola placed her underwear in Mgedeza’s (Mduduzi Mabaso) trousers.

‘GOMORA’: MELUSI IS CHEATING ON GLADYS WITH THATI

Melusi (Zolisa Xaluva) is engaged in a roller coaster of an affair with Thati (Katlego Danke).

The pair have had numerous one-night stands at various times even before Gladys (Thembi Seete) found out she is pregnant.

The September teasers revealed that his wife Gladys will confess to killing Thati and Melusi’s son (Siya Xaba) to her son (Ntobeko Shishi).

Once Melusi finds out what his wife did, she might raise her unborn child by herself when Melusi files for divorce.

‘THE RIVER’: COBRA IS CHEATING ON ANGELINA WITH THE MINISTER

Cobra (Presley Chweneyagae) and Angelina (Nokutula Ledwaba) are one of those couples that naturally gravitate towards each other.

Fans expected Angelina to return to Refilwe after her failed relationship with her second baby daddy.

She’s always made life difficult for Cobra because they share a son and always ruined his relationships with other women.

Cobra cheated on her with Paulina (Tango Ncetezo) in a previous season and Cobra is currently cheating on her with the minister (Maduvha Madima) to win a tender.

‘THE QUEEN’: HECTOR IS CHEATING ON VUYISWA WITH HARRIET

Viewers of the show predicted that Hector Sebata and Harriet Khoza would end up having an affair even before they began.

This is because Rapulana Seiphemo and Connie Ferguson’s characters (Tau Mogale and Karabo Moroka) were previously involved on another show (Generations).

Sebata began having feelings for Harriet Khoza last season and is currently cheating on his wife Vuyiswa (Zandile Msutwana).

Also read: ‘Gomora’ Review: Thati and Melusi’s kiss was both incredible and magical