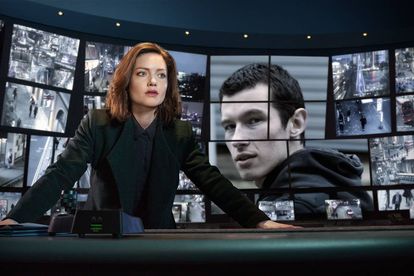 Seeing is deceiving and fiction is uncomfortably close to reality in Showmax’s riveting six-part BBC crime thriller, The Capture.

Callum Turner (War & Peace) was nominated for a 2020 BAFTA as former Special Forces Lance Corporal Shaun Emery, who’s accused of assaulting and kidnapping human rights barrister Hannah Roberts – with damning CCTV footage to prove the crime. But as Detective Inspector Rachel Carey of Homicide and Serious Crime Command digs deeper, she begins to uncover a conspiracy that calls everything about the case into question.

Written and directed by BAFTA winner Ben Chanan (The Missing), The Capture has a 92% critics rating on Rotten Tomatoes, with The Times dubbing it the “thinking man’s Bodyguard,” and The Guardian calling it “perfect TV… nuanced and complex… one of the most cleverly plotted dramas of recent years”, billing the final episode as “a refreshingly grownup hour of television.”

“It’s a story about truth, and finding out the truth… and then proving it,” says Famke. “It’s really about our future and what we are looking at. We are being photographed every single day and in every imaginable way. Privacy is gone – it’s been gone for a really long time… What I think is wonderful about The Capture, and why I believe people will really want to watch, is that they will be constantly guessing and wondering and trying to be ahead of the story, but the story is always ahead of them. There’s so much intrigue, it’s a spider’s web that you will want to get to the centre of.”

In the “post-truth” era, that’s easier said than done. Ben says he set out to create “a modern-day conspiracy thriller that evoked the mood and paranoia of my favourite 1970s post-Watergate movies, The Parallax View and Three Days Of The Condor… I had no idea our current era would turn out to be such a good fit.”

“It’s a real gung-ho, action-packed adventure conspiracy thriller with heart,” says Callum. “What kept me reading [the script] was how invested I became in the characters… I just loved Shaun. There were things in the script that really made me want to play him. For example when he’s being chased and he gets tasered, and the stage direction is that he “jumps the f*** back up again,” I just thought, ‘I want to play somebody who can jump the f*** back up again after being tasered!’”

Callum also leapt at the chance to play a soldier. “I got to do so much research,” he says. “I spent a lot of time with someone who’d just left the paratroopers after twenty-four years, and the stories that he told me, plus learning about the whole mindset and training that goes into being able to do what they do, was fascinating. We did surveillance training where the team tracked me for a day and I had to try and escape from their sights as quickly as possible. That was insane.”

But what’s truly insane is how the show’s relevance has sky-rocketed since its release just over a year ago.

As Holliday puts it, “Things have changed so much. When I first read it, it had a sort of Black Mirror-esque, futuristic quality… but real life is moving so fast that it now feels less like a dystopian future and more like social commentary, and so much less hypothetical than it did at first. It brings up so many moral questions of police, society and surveillance.”

The Capture was nominated as Best Drama at The Royal Television Society Awards and The Broadcasting Press Guild Awards, as well as Best Foreign TV at the Shanghai International TV Festival. As Time Magazine says, The Capture is “the rare thriller that is not just smart and gripping, but also deeply engaged with our bizarre, often terrifying present…”