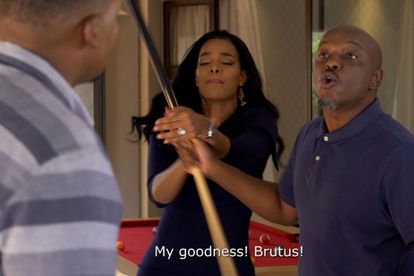 ‘The Queen’ actors, Connie Ferguson and Themba Ndaba as Harriet and Brutus Khoza in a fighting scene. Image via Twitter @MzansiMagic

‘The Queen’ actors, Connie Ferguson and Themba Ndaba as Harriet and Brutus Khoza in a fighting scene. Image via Twitter @MzansiMagic

The Queen fans are bored of the telenovela and have called on producers to bring in more talented actors and better storylines to make the show exciting again.

HARRIET AND BRUTUS AND CARRYING ‘THE QUEEN’

REACTIONS FROM ‘THE QUEEN’ VIEWERS

“To be honest ‘The Queen’ that had Kea, T-gom, Skaqakaqa, Shaka, Brutus and Harriet was way better combo, than this one with Darlington.”

“I think we are aware of Darlington’s motives, we get the picture now can Harriet and Brutus just know the truth.”

“At this rate, the writers of #TheQueenMzans are tribalistic. Brutus has been in business for a long time.”

“He may not be as educated at Harriet’s level, but he wouldn’t trust a new accountant to a point of leaving to lock up and finish transactions on their own.”