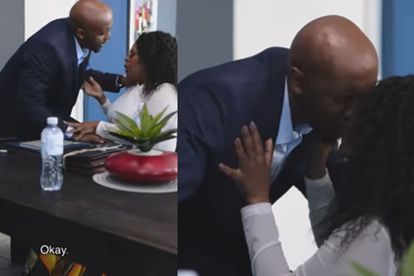 Uzalo’s fan-favourite couple Nkunzi and Gabisile will break up for good in January when she chooses Mthambisi over him.

The TVSA January 2023 Uzalo teasers reveal that Gabisile will break up with Nkunzi (Masoja Msiza) and go public with Mthambisi after cheating on her long-term partner for months.

The teasers also reveal that fan-favourite actor Wiseman Mncube, who plays Mqhele in The Wife season three will return to KwaMashu in January. His mother, Gabisile (Baby Cele) will introduce him to her new boyfriend Mthambisi after breaking up with his father Nkunzi.

“In the aftermath of her breakup with Nkunzi, Gabisile wants Sibonelo to meet the new man in her life.”

“A wounded Nkunzi finally accepts that Gabisile has found love, but is he really over her?”

“Gabisile is confronted about her infidelity.”

“Nkunzi finds a sympathetic ear from an unexpected person.”

Mthambisi is a self-absorbed wealthy man who doesn’t let the word ‘’NO’’ get in his way.

“Also known as Putin, Mthambisi is best described as being dangerous and charming with a magnetic aura. He enters the world under the false pretense of being the owner of a massive media company.”

This move will make him an arch-nemesis to Gabisile’s partner and Kwa-Mashu’s long-standing villain, Nkunzi.

The TVSA January teasers also reveal that Putin’s enemies will try to get rid of him through Gabisile and that she will find out something interesting about him.

Fans of the SABC1 soapie will recall that she is cheating on her baby daddy for the second time after leaving him for his brother Qhabanga (Siyabonga Shibe) in the previous season.